No one… NO ONE is more beautiful than Ingrid Bergman in Casablanca.
By Lindaon September 23, 2013
0 Comments
Our Rating 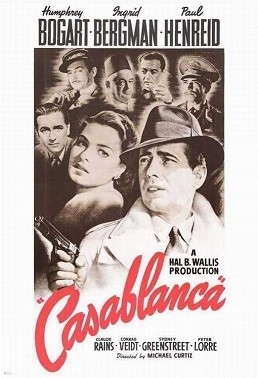 Perhaps showing what a timeless classic it is, Casablanca has provoked different reactions in me depending on when in my life I saw the film. I first watched it as a teenager when I was in the throes of my classic-Hollywood phase. Sure, I thought it was a good film (after all, Ingrid Bergman was one of my obsessions), but I was more captivated by Gone With the Wind. When I watched it again in college, the roomful of cynical students hissed and barked at parts of the film, like Ilsa’s whiny plea to Rick, “Oh, I don’t know what’s right any longer. You have to think for both of us.” Students groaned and giggled at the classic (and admittedly weirdly patronizing) catchphrase, “Here’s looking at you, kid!”

Now, double those college years later, I was fascinated by what I missed while watching it in the early years. There is the fact that Casablanca was made during the war (1942), and was decidedly anti-Nazi (What if the war had turned out differently? Would this film have been obliterated?). There are the politics of expats stuck in the limbo between fleeing Europe and escaping to America. These people of all nationalities, stuck at Rick’s bar in Casablanca, are victims to swindles and promises, and in some cases they (like poor Peter Lorre) will never make it out of this haven in the middle of purgatory. Then there is Isla, who may not be the ding-a-ling she seems to college feminists. She is a woman who, in desperate, self-preserving situations, makes the difficult decisions that she has to make. Her decisions, seemingly selfish, are actually full of the ultimate sacrifice for her own happiness.

Rick (Humphrey Bogart) and Ilsa (Ingrid Bergman) are two of cinema’s most classic lovers. They’ll always have Paris, a carefree time where they met, fell in love, and planned to run off together. But Rick was left at the altar, or more specifically, the train platform when they were to leave the city together. Now a jaded bar owner in Casablanca, he is not too pleased to see the love of his life, who shattered his heart, turn up at Rick’s Café Américain years later with her husband Victor (Paul Henreid) at her side. Ilsa and Victor are trying to flee to America, but the Nazis want to get to Victor first. Will Rick help them? Not until he settles things with Ilsa to figure out why she did what she did.

All I can say is that no one… NO ONE is more beautiful than Ingrid Bergman in Casablanca. With her wide brimmed hats shading her wounded eyes, and her excellent cheekbones so beautifully lit in black and white, well, you can imagine why Rick’s icy heart melts to see her again. Humphrey Bogart shines as Rick, who is a complex enough character that you really aren’t sure until the final scene what decision he has made for Ilsa and Victor. Weaselly Peter Lorre shows up as a petty criminal with some valuable papers that set the whole plot spinning. Then of course there is the fabulous Claude Rains as the French Captain Louis Renault who salutes the Nazis while subversively crossing his fingers behind his back.

Fans of the film will be pleased with the 70th (!) Anniversary Edition of the film which is presented in a fancy box set. The film is presented in an all new 4K scan, which I learned recently is the equivalent quality of a film shown on a 25-foot screen (!!). Hold your breath, this is what the box set includes: 2 Blu-Ray discs and 1 DVD, which include the film and over 13 hours of bonus material, including docs about Bogart, Director Michael Curtiz, additional footage, an audio commentary by Roger Ebert, and a sprawling 5-hour documentary of Warner Bros. Studios (and, believe me, much MUCH more). Additional collectibles include a 62-page hardcover book with productions stills, behind-the-scenes photos, and drawings, a fold-out replica of a vintage 1942 French theatrical poster (nice!), and finally, the treat that all my friends want to steal, a faux-leather wallet that includes a stack of 4 colorful drink coasters with the Casablanca-themed logos on them. With this sort of collection, you’ll want to play it once, for old times sake, but more likely you’ll want to play Casablanca again, and again.