This uneven comedy (based on a so-crazy-it’s-true Texas murder) could have soared as a brilliant mock(doc?)umentary.
By Lindaon November 9, 2012
0 Comments
Our Rating 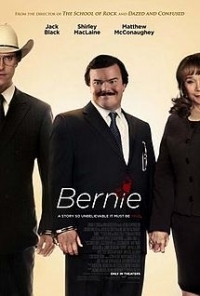 Bernie has one of those plots that is so crazy, that it must be true. Bernie Tiede (Jack Black) was one of the most popular men in Carthage, Texas. A tubby bachelor, maybe even a little “light in the loafers”, was an outstanding citizen with a kind word for everyone. As the town’s assistant mortician, he was especially kind to little old ladies who just adored Bernie. When their husbands passed, he’d be the first to stop by to see how they were doing in the days after the funerals he organized.

One of these little old widows was also the town bitch, Ms. Marjorie Nugent (Shirley MacLaine). After the passing of her husband, Bernie shows up her house, with ingratiatingly cheery face, and a basket of bath soaps in his hands. Soon Marjorie thaws, and to the townspeople’s shock and surprise, Bernie and Ms. Nugent become BFFs, travel companions, and perhaps even connected at the hip. Well, people wouldn’t dare talk nasty about Bernie, so he must be doing it out of the kindness of their heart, and who are they to judge making an old rich widow happy? Especially when Ms. Nugent gives Bernie access to her money, everyone in town benefits from Bernie’s generosity.

But even a kind man like Bernie cracks from the building control and abuse of his lady friend. One day, after tolerating a slew of cruel words, Bernie does something that is not like him at all. He shoots Marjorie. He creatively covers her death by hiding her body away and telling the town a slew of stories to cover her disappearance. Months later, his secret is found out, and the town is shocked, shocked to hear that nice Bernie is accused of murder.

There is a lot in Bernie that is very, very funny. The odd thing is that it feels like two movies: a goofy, Errol-Morris-esque documentary (with talking head interviews with townspeople and other characters), and an broad comedy with over-the-top acting by Black, MacLaine, and Matthew McConaughey (who plays Danny Buck, the prosecutor who finds it hard to convict a popular man for killing a woman that everyone hated). Jack Black has been praised by other critics for his portrayal of the kind Bernie, but, honestly, I’ve always felt that he has “crazy eyes” (in my opinion, at least). I didn’t see a just a kindly funeral director, I saw Jack Black one step from doing something wacky.

The best part of the movie, in my opinion, are the talking-head interviews of the Carthage town folk. Apparently there are some real Carthage residents mixed in with the actors. Though I don’t know which of them, I can only hope that they were the ones that were the most outrageously funny gossips, telling us, the audience, how it was, with their broad Texas accents. Some thought Jack Black is great in this film (eh…), but I’d say see it for the “locals”. If the whole film were filled with unknowns like these, it could have soared as a brilliant mock(doc?)umentary. 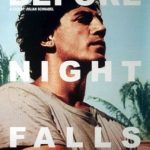 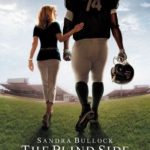