The crew goes back to the 20th century to save the whales, and hilarity ensues!
By Lindaon April 27, 2015
0 Comments
Our Rating 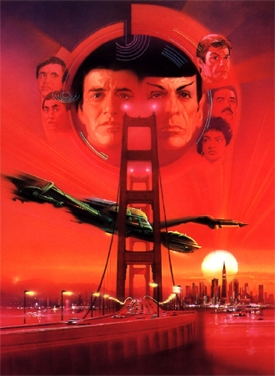 Star Trek IV: The Voyage Home is a refreshingly silly confection after the somber (and dull) seriousness of Star Trek III: The Search for Spock. Now that Spock is alive again, we can move on, and Star Trek IV surprisingly takes an unusual (but ripe for fun) direction.

Kirk & Co. are now piloting a hijacked Klingon warbird after sacrificing the first Enterprise on a sneaky switcheroo trick at the end of the third movie. Spock (Leonard Nimoy) is re-intact as a full-fledged adult like we remember him, but since he has died and been reborn (and had all of his brain-functions re-implanted in his head) he is still a little bit off, struggling to rediscover the context of his surroundings, not to mention his pals. The is Spock-deadpan to the extreme.

The crew of the non-Enterprise find themselves needing to save 23rd century Earth from the ubiquitous Star Trek menace: a mysterious yet menacing space probe. The only thing that can communicate with the probe, they discover, is the humpback whale—which, unfortunately, was hunted to extinction in the 20th century (oops!). So, back to the 20th century the crew goes in order to fetch a whale and take it back to the future to communicate with the probe… and comic hijinks ensue!

I remember seeing Star Trek IV in a movie theater filled with raucous laughter from the audience. And heck, I still say “nuclear wessel” in Chekov’s warbly Russian accent when the time calls for it. Watch as our Enterprise crew casually cloaks their Klingon ship in Golden Gate Park; laugh as they take public transit with the riff-raff of our society; and sit on the edge of your seat as they run for their lives to make it back to the future. The cast is totally game, and the campiness that made the original series so loveable is set to stun in this film.

Sure, like most 80s pop culture entertainment, Star Trek IV is a little dated at points, but, come on! It is still very watchable, very very funny, and is easily the most fun of all the big-screen Star Trek movies.

Star Trek IV: The Voyage Home is included in the Star Trek Motion Picture Trilogy DVD set (which includes movies II, III, and IV), and has been remastered in high definition. Extras include feature commentary by Star Trek writers Roberto Orci and Alex Kurtzman. Going along with the Save the Whales theme, there is a featurette about commercial whaling and Greenpeace called “Star Trek for a Cause”. “Star Trek: Three Picture Saga” discusses how movies II, III, and IV became a unplanned self-contained trilogy due to momentum and box office success. “Pavel Chekov’s Screen Moments” is a tribute to Walter Koenig’s heavily-accented Russian officer who was the scene-stealing comic genius in Star Trek IV with a charming interview with the actor.