Sure, the kid needs help. But it’s kind of cringey hanging out with a character who keeps digging his hole of lies deeper and deeper while capitalizing on other’s grief. 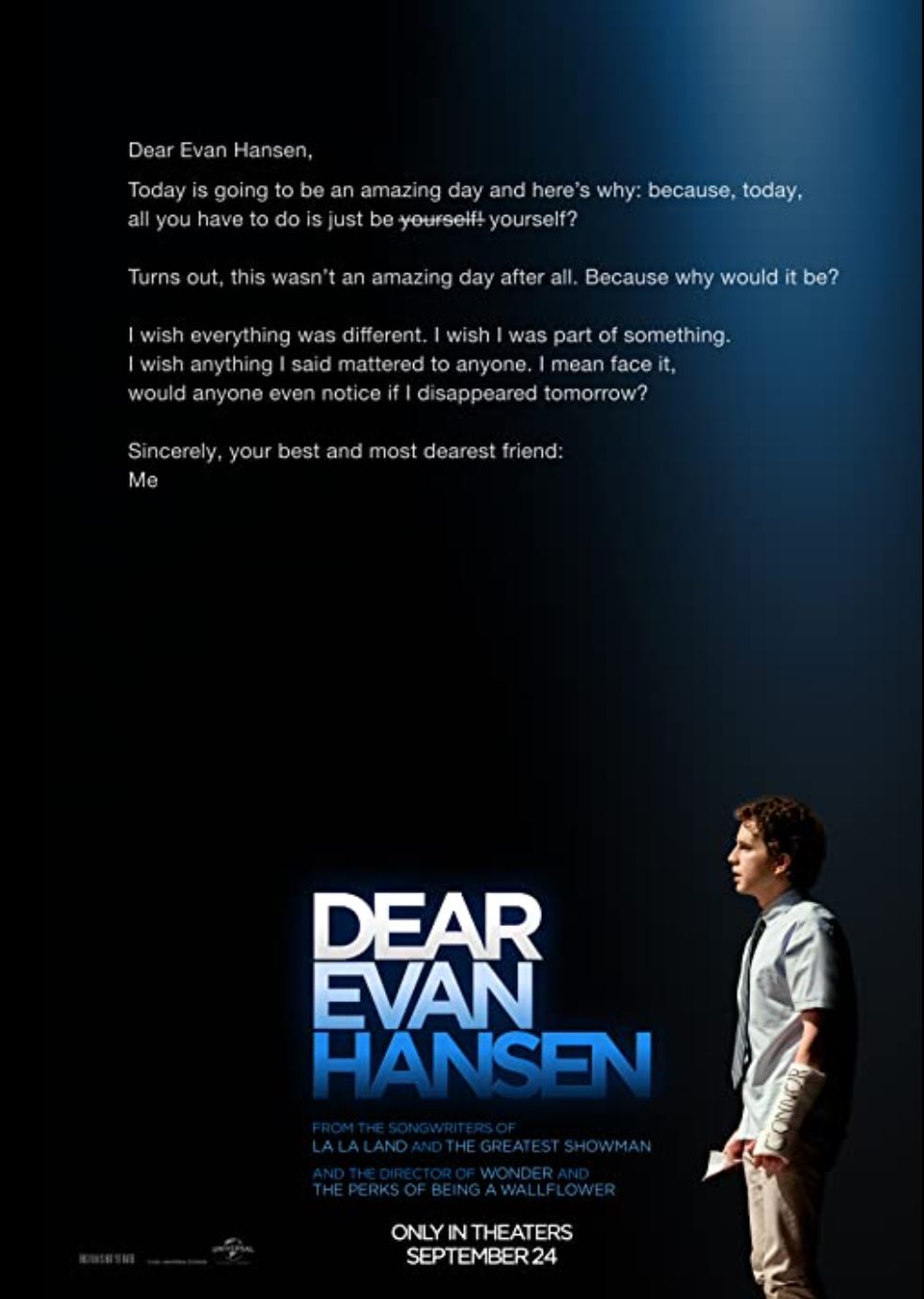 When I saw director Stephen Chbosky’s name revealed in the trailer for Dear Evan Hansen, I clutched my heart. Chbosky made the fantastic movie The Perks of Being a Wallpaper in 2012, impressively adapting his own novel for his first feature (wow). The film, for me, came out of nowhere, blindsided me, and made me sob for almost two hours at a (thankfully) sparsely attended matinee. Perks ended up being my favorite movie of the year, so I had high hopes for this adaptation of the smash Tony and Grammy winning musical. The Dear Evan Hansen trailer got me choked up, so I was optimistic (in a respectful way, of course, as it is a story about suicide).

I didn’t hate it. But there is a problem when a trailer can make you cry, but the movie itself leaves you dry-eyed.

Dear Evan Hansen has a tricky protagonist to like. Evan (Ben Platt) is nerdy, has social anxiety, and is seeing a therapist as he faces his senior year of high school. He has no friends except a guy who seems to hang out with him out of obligation (their moms are friends), but otherwise is seemingly invisible at school. One day he is writing a letter to himself (“Dear Evan Hansen…”), an assignment from his therapist where he is supposed to boost his daily attitude. But that day’s letter ends up being depressing, and even worse, this kid Connor (Colton Ryan) grabs it from the printer and takes it. Connor, a surly loner who other kids describe as a potential shooter, flips between being vaguely nice to Evan (signing his cast) and screaming at him by the locker. That is pretty much their only interaction.

So Evan is surprised when a couple days later, Connor’s parents (Amy Adams and Danny Pino) show up at the principal’s office to tell Evan that Connor killed himself, but they were so happy their son had a friend like Evan (mom tearfully passes the “Dear Evan Hansen” letter to him). It’s hard to say what anyone would do when faced with grieving parents, but Evan plays it safe, not daring to tell them that they weren’t friends at all.

Unfortunately, it doesn’t stop there. The parents need to know more about their son from his friend, so Evan starts making shit up. He get’s his one pal to make up and email correspondence between the two (which has the most laughingly unrealistic made up letters between two modern teenage boys), and they start inviting him over. Evan just plays along. It seems to be making Connor’s parents happier and “feel closer” to their dead son. Plus, Evan has always had a crush on Zoe (Kaitlyn Dever), Connor’s younger sister, so there’s that benefit.

OK, now let’s step back a minute. I remember reading an expose article a few years ago about people who fake online personas, where they pretend to have cancer, or pretend to have a sick child, or other horrible real life scenarios, in order to wring sympathy from online strangers. Evan Hansen is of this ilk, so even though he is sympathetic with his own issues, what he is doing is so wince-inducingly wrong that it is hard to follow him around and listen to his feelings through his songs.

Oh, and the songs? Only a couple had any resonance melody and lyric-wise, including “You Will Be Found,” which he sings at a school memorial–and because this is now, the song goes viral and suddenly peers care about the dead kid that they always muttered about. When I read that the songs were by Benj Pasek and Justin Paul, I went, “Ah.” They are know for La La Land, among other things, and I did. not. like. that. movie. Also, the movie is made like a straight drama, so when a song is dropped in to a normal scene, it slows things down in an awkward way (is it bad that I thought the songs should be shortened for the movie?).

You know that Evan will eventually get his comeuppance (as he should) and it will end in tears for everyone. Except, surprisingly, for this member of the audience. I ended up appreciating the acting (and singing) by all involved, but was kind of grimacing rather than sympathizing at every misstep that Evan took. Kid, you really, really need to get back in therapy.