Hand-drawn animation may be dead in the eyes of the Disney animation studio, but one only needs to look to Japan’s Studio Ghibli to see how it’s done.
By Lindaon September 29, 2013
0 Comments
Our Rating 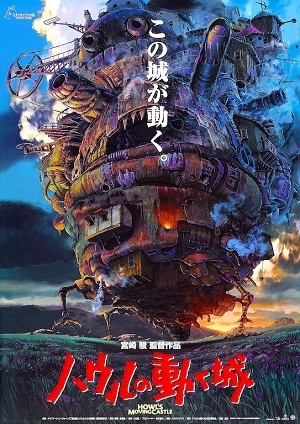 What I hate about modern Disney movies is the relentless, shove-it-down-your-throat merchandising that comes with every release. Buy the soundtrack! The Happy Meal! The action figures! The t-shirts! The tie-ins destroy a movie before you get a chance to judge it for its worth.

So am I a hypocrite for immediately wanting to run out and buy toys and plushies and action figures of just about every character in Studio Ghibli’s Howl’s Moving Castle? Maybe. But try to resist the charms of Turnip Head or Howl or Sophie or Markl. While watching Howl’s, I immediately started calculating how I could get my hands on a plush Calcifer doll to hang next to the furry Totoro on my car’s windshield.

Hand-drawn animation may be dead in the eyes of the Disney animation studio, but one only needs to look to Japan’s Studio Ghibli to see how it’s done (making it more than a little ironic that Ghibli’s films now join Pixar’s as easily the best animation distributed by Disney). Master animator Hayao Miyazaki (whose magical Spirited Away won Best Animated Feature Oscar a couple years back over such big U.S. releases as Ice Age and Lilo & Stitch) returns with another masterpiece, this one based on a Diana Wynne Jones’ European-style fairy tale. Despite going to an external source for a story, Howl’s fits perfectly into Miyazaki’s magical, and slightly dark storytelling style.

Sophie is a young woman who works a lowly job as a “hatter” in a generic European-looking town. One day she is protected by some thugs by a rock-star-handsome young wizard, the mysterious Howl (who had bad-boy charm, and gorgeous locks of blonde hair falling into his eyes). Howl has a bit of an outsider rep in the the wizard-neighborhood, living on the outskirts of town in his crashing, steam-spewing, monstrous, walking jalopy of a castle (which is something wondrous to behold). When Sophie is unlucky enough to cross paths with the unpleasant Witch of the Waste, she is turned into a 90-year-old woman, with the predicament of being unable to tell anyone what happened to her. Sophie finds herself going to Howl, and the magical world of his magic castle, to seek help.

Without resorting to singing and dancing teapots, or sidekick monkeys, Miyazaki once again creates some of the most charming and memorable characters in animation. My favorite was Calcifier, quite literally the fire that has been given the duty to keep the castle moving, creating the steam the makes the castle creak and groan and lurch across the countryside. How can you make character out of fire? Calcifer has two eyes, and pretty much a line for a mouth… but he is one of the sassiest, most cranky and loveable characters I’ve seen in an animated film since… well, probably Jiji, the cranky cat in Miyazaki’s own Kiki’s Delivery Service. Calcifer made me scream with laughter, every time he opened his mouth. His Japanese voice was perfect, so I can only imagine how the English-dubbed version with Billy Crystal as Calcifer sounded.

In fact, Howl’s probably most closely resembles Kiki’s Delivery Service in style and tone. I think this film is more accessible for all ages than the equally wonderful Spirited Away, and definitely the somewhat cryptic Princess Mononoke. I have almost all of Studio Ghibli’s feature films in my video collection (and yes, many of them are very hard to find), and I can see Howl’s Moving Castle easily take its place among the studio’s best films.

So take note, Disney. Hand-drawn animation is not dead. You just need to learn some tips from the true masters.