It’s kind of too bad for Fantastic Four that a number of other kick-ass superhero films have been released in the past couple of years, because the inevitable comparisons are sure to arise.
By Vickieon April 27, 2015
0 Comments
Our Rating 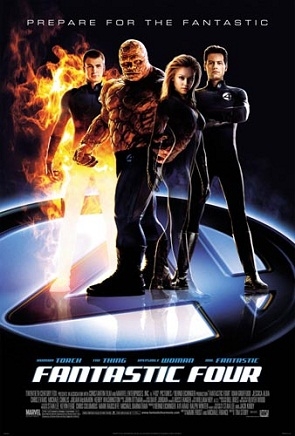 Heck, even I sat in the theater thinking, “This is really good, but not quite as good as X2 or Spider-Man 2.” By the same token, the first films in those two franchises weren’t as strong as their sequels, so perhaps The Fantastic Four Return (or whatever the more-than-certain sequel will be called) will be a mind-blowing experience of a superheroic nature.

For now, the filmmakers lay the groundwork by telling the story of how The Fantastic Four came to be, and by fleshing out the details of the scientists who mutate into the titular team. For starters, it’s a space mission gone awry and the pesky unexpected appearance of a nasty solar storm that zaps our heroes (and our villain) with all kind of intergalactic rays that rejig everybody’s DNA. Mild-mannered science nerd Reed Richards (Ioan Gruffudd) becomes the elastic-bodied Mr. Fantastic; his ex-girlfriend, Susan Storm (Jessica Alba), discovers she can make herself The Invisible Woman and throw force fields; her brother, hot-shot daredevil Johnny Storm (Chris Evans), morphs into the flame-throwing Human Torch; and lovable oaf Ben Grimm (Michael Chiklis) bulks up into the rock-hard The Thing. Oh, and purveyor of evil, Victor Von Doom (Julian McMahon), also walks away from the accident with a handy new trait – his body is slowly becoming metallic, electricity runs through his veins and he already has a surname ideal for nefarious activity…which he begins to enjoy with reckless abandon.

Essentially, the plot of the film revolves around the Four discovering, honing and eventually using their powers. Initially horrified, they begin to adapt to their new and improved bodies, though Ben remains grim that he’s turned into a human rock formation. Von Doom, for reasons that aren’t exactly clear but seem to indicate jealousy and hostile ennui, wants the Four eliminated. A back and forth good vs. evil superbattle ensues for the latter half of the film.

The success of films like this one lie in their casting – put together just the right combination of actors in just the right roles and you have a winner (see: X2). Bungle the casting, and you wind up with a big, fat dud (see: Catwoman, Batman & Robin). Thankfully, Fantastic Four assembles a great little quartet, who all work off each other nicely. Gruffudd’s nebbish geek is the perfect counterbalance to Evans’ glory-hound showboater. Chiklis’ deadpan provides levity, and Alba’s cool calm and perpetually displayed cleavage will give fanboys (and girls) the eye-candy they seek. Together, they’re a funny, loving, bickering, heroic family.

The action is kept at a nicely explosive level, with some über-kewl special effects thrown in for good measure. In this digital age, it’s always nice to be pleasantly surprised by a film’s SFX, and Four delivers the goods in that regard. Story-wise, though, the film is a little thin. As mentioned, Von Doom – despite being a wonderfully wicked meanie – seems kind of directionless in his rage. He’s really, really, really mad…but it’s never clear if his exaggerated hatred is a result of his mutation or his mood. Once his plot is exposed, the story also adopts a formulaic approach and falls into a familiar pattern. It’s not wildly original, but it’s still fun.

Again, it’s best to think of this movie as a prologue of what’s to come. Now that we know who The Fantastic Four are, and what their first “missions” were like, we can sit back and wait for the (hopefully) thrilling next chapter in their saga.