This extremely entertaining documentary portrays quite literally the “first ladies of wrestling.” Spanning the 1940s to the present, Lipstick & Dynamite is a dynamite time capsule of a sport that I had no idea included women as early as World War II. This was WAY before burly women like Chyna dominated the press with their bulging biceps and huge Amazonian breasts. These women were athletes and rebels way ahead of their time.
By Lindaon October 27, 2016
0 Comments
Our Rating 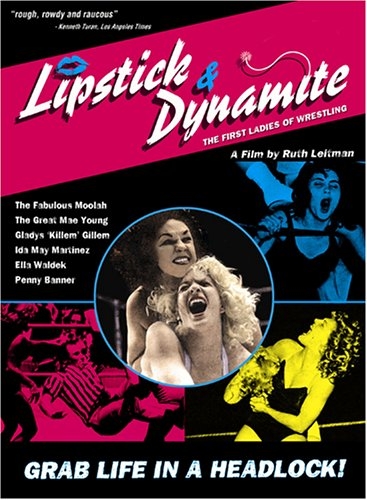 There are those of us (myself included) that may doubt that mid-century American women had the smackdown skills of, say, modern WWE entertainers. But any doubts will be laid to rest with this film—Lipstick & Dynamite offers tons of awesome archival footage of “girl wrestler” bouts from the ’40s and ’50s, complete with the original commentator’s play-by-play. Talk about opening my eyes and learning something new! This footage kicks ass!

Through modern-day interviews of what seems on the surface to be little old ladies, it is clearly revealed that even now these women (aged 60 to mid-80s) have retained the brass and sass that made them warriors in the ring. Though many women are interviewed, the film highlights wrestler The Fabulous Moolah (Lillian Ellison), a lipsticked, bleach-blonde, salty-tongued woman who fought and won a bout on her 80th birthday. Reigning champion for 28 years (though other girl wrestlers have their own comments about that title), Moolah lives with wrestler pals “The Great” Mae Young and “Diamond Lil” (a midget, whom Moolah treats strangely like well-trained child). Some don’t agree with Moolah continuing her career in the ring: “Some of the girls do not know when to hang up their boots and their tights…” one retired wrestler clucks disapprovingly. And much of the tension of the film involves the other wrestlers meeting up again with Moolah at the Gulf Coast Wrestlers Reunion. The other women interviewed let it be known that Moolah didn’t make many friends in the sport.

Lest you wonder what happens to a lady wrestler when she retires from the ring: one became a security guard, another a nurse, one a yodeler, and another a lion tamer. “I just got tired of kissing ass…” says Gladys “Kill ’em” Gillem, of leaving the sport that had cutthroat physical and personal rivalries—a sport that was still controlled and often rigged by big-time male producers who raked in all the big bucks. Lucky for us, Lipstick & Dynamite catches up with these women while they’re still around with stories to tell, and gives them one more moment in the spotlight.