Ponyo (Gake no ue no Ponyo)

If this film had been made by an American studio, its sweetness would make your teeth shatter and fall out of your face. But since it was produced by Japan’s beloved Studio Ghibli, Ponyo manages to be simply so adorable that you just want to smile your half-orange smile and squeal like a 5-year-old. 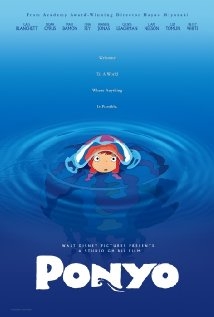 Unlike some of the more recently wonderous and often dark films by Hayao Miyazaki (like Spirited Away or Princess Mononoke), Ponyo is squarely for the My Neighbor Totoro set… which simply means any age should love it. It is a story of friendship between a 5-year-old boy named Sosuke (voiced in the English version by Frankie Jonas) and, well, a fish he names Ponyo (Noah Cyrus). Due to the magic of the sea, and the impatientness of a child, Ponyo figures out how to turn into a human girl, so she can be friends with Sosuke forever. Why? Because, “Ponyo loves Sosuke!” (And, it’s worth mentioning, “Ponyo loves HAM!”)

Except Ponyo is a child of the sea, and her father, Fujimoto (Liam Neeson)—who curiously looks like he would not be out of place in the band The New York Dolls—tries to rein her in before the whole world gets out of balance; or worse… before her goddess-of-the-sea mother Gran Mamare (Cate Blanchett) finds out. But his attempts are too little, too late. The ocean rises (in a dramatic and scary scene where Sosuke’s mom [Tina Fey] is driving them on wild soaked roads to get to higher ground) and soon the world is almost entirely covered in water. Sosuke and Ponyo have to go get help, and they also need to hopefully fix what went wrong in the world. But will Ponyo get to stay as a human girl? Or will she have to return to the sea?

There are so many things to love about Studio Ghibli’s films, I don’t even know where to begin. Just look at the (yes) gorgeous hand-drawn animation of the children in a little boat, puttering along over the trees and roads. Look at the familiar changed into something completely imaginative (like the waves of the rising sea are actually huge jumping fish). Pay attention to the little details, like the clank of chopsticks as Ponyo drops hers and literally slides off her chair into sleep in the middle of a meal. And heck, did you notice that there are almost always elderly people featured as characters in Ghibli’s films, and that they are fully-realized characters? I could go on and on.

Ponyo may not rank among my absolute Studio Ghibli favorites (let’s see, there’s Howl’s Moving Castle… or Totoro… or Grave of the Fireflies… or…), but that said, it is still head and shoulders above almost all animated family movies out there. Ponyo is delightful and sweet and is all sorts of cute, and that is not a bad thing at all.

Disney’s Blu-Ray and DVD combo pack includes all of its extra goodies on the Blu-Ray (how’s that for making you want to upgrade!). Impressively, like the other new Disney/Ghibli rereleases, the Blu-Ray includes the full storyboards for Ponyo (which basically has you watching the movie again, but in rough sketches). Plus there are also a bunch of short featurettes lumped under the banner of “The World of Ghibli,” including all-new interviews with Miyazaki, as well as more info about the characters and inspirations for the film.