It’s the movie equivalent of a dialogue-driven page-turner, as an unassuming tailor finds his quiet shop the center of a bloody mob drama over one snowy night. 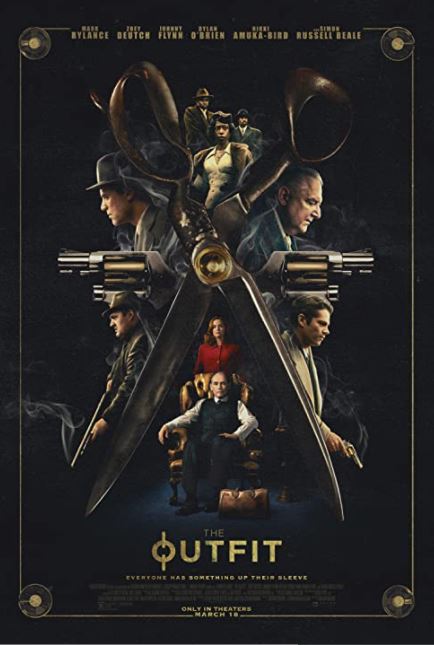 In the intro scene of The Outfit, a tailor (no, a “cutter,” as he prefers to be called), talks us through the art of designing, cutting, and tailoring a bespoke suit for a gentleman. The camera lovingly follows the hands of this man (Mark Rylance), as he unrolls reams of fabrics, traces designs, and wields the impressive shears of his trade. His chalk draws patterns on the fabrics–sometimes a straight line, other times a smooth arc–and it may as well be a tease of the twisty plot to come…

The Outfit is a stagey, one-room mystery/thriller, all taking place in a 1956 Chicago shop owned by one “L. Burling” (Rylance), a British cutter trained on London’s famed Savile Row. He is a prim, tidy man, with the blank slate of a past. Why would such a skilled artisan come to Chicago? Apparently, “blue jeans” (the downfall of classy menswear). Turns out, Chicago’s bespoke suit business is bustling in a different way: Though they may not be gentlemen, Chicago’s mobsters sure want to look like a million bucks. And it soon becomes clear that the tailor’s shop has been adopted by the mob as a home base, a discreet place where money and information can change hands via a drop box in the back cutting room.

One snowy night, the worlds of the local mafia and the unassuming tailor collide when a couple of young mobsters (one being the son of the big boss) show up after hours at the tailor’s door after a shootout. One has been wounded, and “English” (as they not-so-cleverly call the tailor) is thrust into the unenviable position of hiding them and doing his best to sew up a nasty bullet wound. (Talk about getting blood on your hands!) Turns out there is not only a struggle between this Irish mob and a French mob to rule the streets, but there is also the tension of an unknown “rat” among their clan’s own ranks, who giving information to the FBI. As the mobsters come in and out the door, and bodies start to pile up in the struggle for power, it slowly comes out that the tailor may not be as quietly unassuming as he seems.

After the fabric-cutting-and-sewing porn of the opening scene, it took me a little while to get into The Outfit (due to some actors overdoing the school of Goodfellas-mobster acting)… but to its great credit, the film gets better as it goes. There are many twists and turns, including a masterful scene between Rylance and Simon Russell Beale’s mob boss Roy, a man who is just trying to find his heir-apparent son (Dylan O’Brien). Also particularly good is Johnny Flynn as Francis, brought under the wing of the boss when he was a kid, who may be more of a natural at the business than the boss’ own blood. Flynn exudes a sinister intelligence from his pores, a confident man destined to claw his way to the top, even (or especially) if it means taking some bullets in the meantime.

Refreshingly, and notably as every major film release these days seems to involve capes and superpowers, The Outfit seems like a sharp, crisply written movie for adults. Rylance, as always, is great as the quiet center of the movie. You know that he knows more than he is telling us… and being so quiet, he’s not telling us a lot. His skills up the game not only for the other actors around him, but his character seems to up the game for the other characters as well. Just like we don’t know what to make of the tailor, only the smartest characters seem to figure out that he is perhaps the one they should definitely keep an eye on. Like a good novel on a snowy night, The Outfit turns out to be the movie equivalent of a page-turner… it keeps you guessing right up until the final scene.