Perhaps the most-hyped movie of 2000, X-Men cannot help but disappoint some, but it did what a superhero movie is supposed to do: it got my adrenaline pumping and made me wish I had super powers, too. 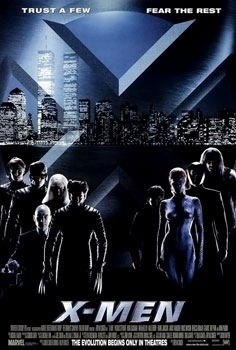 I grew up stealing peeks at my dad’s old X-Men comics, those glory-days of the 1960’s, long before Wolverine came on the scene. In high school, I suppose I became too “grown-up” for comics anymore, and stopped reading X-Men. This may have been a mistake, but at least it allowed me to come into the movie as a non-fan, able to see where the movie had gaps or relied on knowledge of the comic books. Surprisingly, especially for such a complex gang of heroes, I found it easily accessible and understandable, without being too heavy-handed about the exposition.

They made the wise decision to focus on just a couple characters, using the others basically as excuses for special effects, but allowing us to know and care about Logan (Hugh Jackman), Rogue (Anna Paquin), Prof. X (Patrick Stewart), and even Magneto (Ian McKellan). Indeed, the writers took a great risk making Magneto less than purely evil, but painting his anger as justifiable and his methods as understandable. I think the risk paid off, raising the conflict above your run-of-the-mill action flick.  Given the inevitability of sequels, I can only hope they continue to develop the friendship/enmity between Prof. X and Magneto.

Also, unlike previous comic-book crossovers, X-Men does not take place in some fantastic designer world, but grounds itself solidly in the real world. In one of the best lines of the movie, Logan says, “This is the stupidest thing I’ve ever heard,” trusting the audience to infer the wink and nod. The film sets itself in the context of the Nazi concentration camps, the U.S. Senate floor, TV news broadcasts, and real-world locations like Ellis Island and various parts of Canada. (Indeed, when was the last time you saw Canada play a major role in a Hollywood picture?) It begins with some admittedly simplistic pseudo-science that both explains the superpowers of our heroes and ties into the current news about the human genome, cloning, genetic engineering, and the ethical dilemmas they pose.

Sometimes, these real-world connections and parallels give the film a certain depth, but more often they weigh it down. Using McCarthy-era rhetoric to paint bigoted politicians as the real villains, without really developing the basis of their fears seriously, as Magneto’s fears were, gave aspects of the film a preachy tone. The anti-mutant senator explains that he has no real reason for hating mutants, he’s just “made for times like these.” After all, it’s conceivable that mutations themselves would pose a direct and physical danger to innocent people, but no one develops or counters this perspective, and frankly the direct paralleling of mutants to Jews or Communists just doesn’t work.

Still, I have to give it credit for trying to be a thinking-person’s comic-book action flick, even if it doesn’t always succeed. I actually expected it to be a massive failure and was pleasantly surprised. What makes this movie work is that the characters always drive the action, rather than the special effects or the weirdness of the superpowers. Prof. X and Magneto (both played by excellent actors) develop a compelling relationship. (I have to note that Stewart returns to his finest form when he adopts the father-figure mantle he perfected as Capt. Picard.) So what if Logan’s motivations and romantic inclinations remain a bit muddled; and I’m willing to let Logan develop over the course of the sequels.