It’s been awhile since we’ve had such a scrumptiously adorable newcomer onscreen as Audrey Tautou’s Amélie. 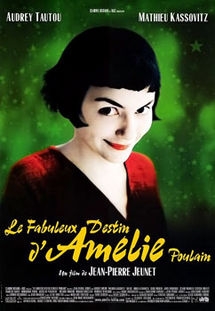 With her slightly ruffled pixie haircut, big blinking eyes, deep black pupils, porcelain skin, slightly ducky overbite, and big clunky shoes, Amélie looks like she should be sharing a cartoon screen with none other than Mickey Mouse. Amélie’s world is full of bright bold colors, Parisian landmarks at their most flattering, and magical moments of literally wide-eyed wonder.

The first portion of the film introduces us to Amélie, starting literally at conception. She is an adorable child, but impish enough to wreak revenge on a neighbor that traumatizes her with teasing lies. When the story-telling teeters on the brink of becoming sticky-sweet, we are reminded that it is indeed a Jean-Pierre Jeunet film (City of Lost Children) when little Amélie’s mom is abruptly squashed by a disgruntled Quebecois tourist jumping off the Notre Dame.

Flash forward to Amélie as an adult (Tautou), a sweet young woman who lives alone and works at a neighborhood café with a passel of goofy regulars. Without going into too much detail (half the fun is watching plot tangents unfold), the film at this point starts to mirror Jane Austen’s Emma (or Clueless, for you kids out there). Amélie becomes fixated on improving other people’s lives through coy and discreet interventions, while ignoring her own pursuit of potential happiness with a nice young man named Nico (Mathieu Kassovitz), whom she seems obviously destined to be with.

The whole tableau is painted with slight exaggerations, luminous colors, some imaginary sequences, and dare I say “whimsy”, to make Amelie much more unashamedly magical and fantasy-like than any adult film we’ve seen in quite awhile—and it works.

Though it is ultimately a light confection—pleasing to the eye and the palate without being too deep—Amelie is a charmer. It is funny and sweet; romantic and silly… and because it IS a Jeunet film, just quirky enough to make the whole concoction seem refreshing and new.