Though it feels like a retread of The Bodyguard and A Star is Born for a new generation, Beyond the Lights rises above the tedious because of its appealing stars.
By Lindaon March 18, 2015
0 Comments
Our Rating 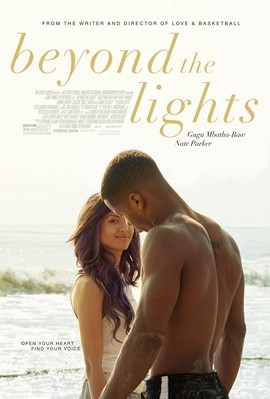 On the night of the music world’s flashiest awards, new superstar Noni (Gugu Mbatha-Raw) should be on the top of the world. With her sexpot image and her hit songs with her white-boy rapper collaborator/boyfriend (Machine Gun Kelly), Noni is a media sensation. But something in her snaps, and we meet Noni not on top of the world, but uncharacteristically drunk and on the edge of the hotel balcony. As she slips off the edge, her assigned bodyguard/cop-for-hire for the evening manages to grab her hand, averting disaster for Noni’s overbearing stage mother (Minnie Driver), and, well, averting death for one depressed young singer.

The media susses out the incident as a suicide attempt, but Noni’s mother plays it off as a drunken accident. And though Noni’s bitchy veil comes back down again, she and the hot knight-in-shining-armor cop Kaz (Nate Parker) both sense that they had A Moment, and slowly, curiously circle each other. Kaz appeals to Noni, because he “sees her”. Kaz is understandably more hesitant, as he sees a pop-diva world where he doesn’t belong (plus, his dad Danny Glover reminds him, with Kaz’s political aspirations, having a half-dressed media whore girlfriend may not play well with voters). But after a kinda rapey seduction scene (with Noni as the aggressor), well, we know they are meant to be together (or are they?).

I didn’t expect much from Beyond the Lights, but because of its appealing cast and its peek into the machinations of the modern pop culture world, I found it surprisingly entertaining. Noni is kind of hard to like, so I appreciated that Kaz remained hesitant while still falling for the diva. Gugu Mbatha-Raw, who I’d only seen in the 18th-century period piece Belle, proves her versatility and is quite convincing as a gorgeous yet vulnerable superstar. Nate Parker, in turn, plays the straight man to the chaos of Noni’s world, but bless his heart, he is cute, strong, and knows when to draw the line (there is a moment where he throws one of the more deserving punches I’ve seen in any movie all year).

Now, I may not be entirely convinced that every hootchie-coochie girl singing on the latest rap hit is hiding an inner Nina Simone, but I liked that Beyond the Lights made me think it’s possible.

The Blu-ray release has a director’s cut (16 seconds longer than the theatrical cut!), and deleted scenes that both include commentary by director Gina Prince-Bythewood, cinematographer Tami Reiker, and editor Terilyn Shropshire. There is a short profile the film’s late boom operator Gary Thread, a music video, and “Escape to Mexico 2.0” which has extended moments the characters, um, cavorting. 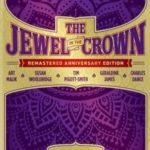 PreviousThe Jewel in the CrownNextExodus: Gods and Kings 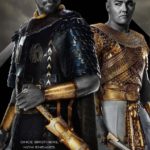