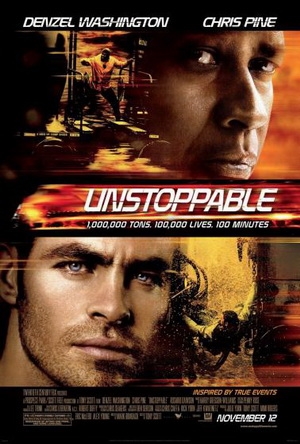 My friend and I, I’m sure, were the only people at the Unstoppable screening who high-fived each other in excitement at the mention of a train full of Molten Phenol. You may not know this, dear readers, but I have a “real” job that pays the bills. Long story short, a movie about a train full of hazardous materials is perhaps the most job-related major motion picture ever created for me, with a big neon arrow pointing at my head announcing “Target Audience”. Seriously. I was watching Unstoppable with a critical eye towards placards, markings, and paperwork for the shipping of nasty things properly. Sure, the filmmakers skimped on a few regulatory requirements, but I was willing to let it go once the train got moving.

So, there’s a cargo train with a slacker conductor who jumps out to manually change the lever on the track in the rail yard. But you NEVER leave your train, especially if it is moving kind of fast, and you are probably thinking about eating a donut, and aren’t exactly a lithe, fast runner. Doesn’t take much for the train to get away and start rolling away.

But, OHMYGOD! The train doesn’t have any brakes!!! And is that a train-full of school kids miles ahead ON THE SAME TRACK?!??! Is the train getting faster and faster with no plan to slow down??? Is it headed toward a highly populated area where it is destined to fly off its tracks RIGHT DOWNTOWN?!?! You know it is! Wooo! Runaway Hazmat Train! Runaway Hazmat Train!

But since we are not supposed to root for the train, Tony Scott throws in some man-candy in the form of pretty-boy Chris Pine and always-welcome and totally aging well Denzel Washington, who can give even the most throwaway role gravitas. Chris and Denzel have to stop that runaway train! Chris is estranged from his woman. Denzel is a widower whose two adult daughters work at Hooters (wait… what? oh, never mind… train!). They just want to get back alive to those that they love. Of course they do! In the meantime, bystanders are standing agape along the tracks in small towns, watching the train fly past at 70mpg towards DESTINY and DESTRUCTION.

There’s no reason to detail the plot any further, since half the fun is figuring out how they hell they are going to do the train, and how much they have to risk in trying (EVERYTHING, of course!!!). The crazy thing is: Unstoppable is based on a TRUE STORY! Don’t you just love it? Heck, I kind of did.