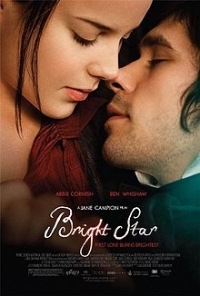 The setting is 1818 in Hampstead (a “village” outside of London). Being this era, and being a movie (vs. the reality), almost everyone we meet doesn’t seem to have any sort of job or income, but they just fret about things like moving from the summer house to another seasonal rental when the leaves change, or who will fill their dance card at the next dress ball. They stroll in fields and take naps in treetops, and they can rustle up enough money to go to Italy, if the need arises. I guess squalor isn’t very cinematic, but Jane Campion is out to convince us that poetry is!

Fanny Brawne (Abbie Cornish) is a headstrong young lady who has opinions, lots of suitors to fill her dance card, and refreshingly has skills. In fact, she brags about her seamstress skills, even boasting that she can make more money than those poets that just moved into the other half of the house for the season. These two poets are interesting and ingratiating. First there’s the boorish Mr. Brown (Paul Schneider) who toys with Fanny, constantly insulting her with his wit, which she just as easily fires back at him, furiously. But the other waify fellow, young John Keats (Ben Whishaw) doesn’t have the wit… he’s too sensitive. And he doesn’t quite know what to make of flirty Fanny. With some inquisition, they start to dance around each other metaphorically (he doesn’t dance), and their mutual intrigue deepens.

Bright Star (named after a famous poem that Keats wrote for Fanny) takes its sweet time building this sweet romance. There is no bodice-ripping here; decent society wouldn’t allow for that. Plus Fanny’s mother (Kerry Fox) is none too pleased that this poor poet has lured her daughter’s interest. Fanny can’t marry a poet; she needs to find a man with money. But as season’s change, and the young lovers’ devotion remains persistent, mom might have to acknowledge that young Mr. Keats has her daughter’s heart.

But then Mr. Keats (history spoiler!) gets The Cough. Oh, dear. Heartbreak awaits.

In addition to a notably fresh script for a costume drama (written by Campion as well), the characters often spout poetry thoughtfully to give the viewer a taste of what keeps these poet fellows so vexed whilst lounging sofas, waiting for inspiration. At one point, Fanny speaks for much of the audience, bluntly stating that poetry doesn’t really do it for her, but she’d like to learn more. And Bright Star sucks you in that way. While enjoying a doomed romance, you find yourself (at least if you a poetry novice) learning about what made John Keats (a failure in his lifetime) one of the most celebrated English poets.