I would have been happy to follow these characters forever.
By Jenniferon October 27, 2013
0 Comments
Our Rating 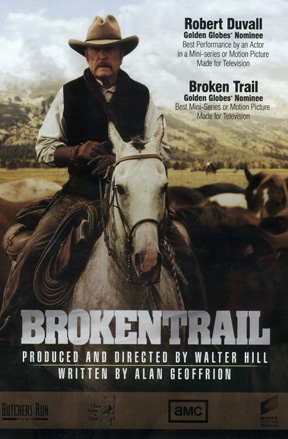 All good things must come to an end, but after four hours, I still couldn’t get enough of Broken Trail. Set in 1897, this compelling mini-series follows Print Ritter (Robert Duvall) and his nephew, Tom (Thomas Hayden Church), as they drive five hundred horses from Oregon to Wyoming. Though their journey begins as a business venture, it quickly becomes a test of character.

The boys have barely begun their trek when Tom picks up Henry Gilpin (Scott Cooper) at a saloon. Already things are veering off course, but Henry plays the fiddle, and they could use a third hand. It’s their encounter with Captain Billy Fender that will change their fate forever.

Played by the deliciously scummy James Russo, Fender is a vulgar loudmouth with a wagon full of frightened Chinese girls, and he’s desperate for company. Apparently the girls have made very poor traveling companions. They don’t speak any English, and for some reason they’re not at all excited to be delivered into a life of prostitution. As if being a Virgin Celestial Novelty Whore is such a bad thing! Print, Tom, and Henry are immediately repelled, but obligingly share an evening of dinner and drink with this vile man. In the morning, our boys realize they have been robbed.

Tom hunts Fender down and strings him up, but that hardly seems sufficient. Though the men reclaim their belongings, they must now figure out what to do with the girls. One can barely walk due to a lifetime of foot-binding, another has all but lost her will to live after being raped by Fender, and the other three are simply terrified. It soon becomes clear that leaving the girls at the nearest town is simply not an option. They will most certainly be delivered to the Madame who purchased them, and they have no way to fend for themselves.

Despite the barriers between them (language, culture, gender), these unlikely traveling companions develop a somewhat symbiotic relationship. Print dubs them 1, 2, 3, 4, and 5 respectively, and they soon learn to help with cooking and to drive a wagon. Communication may be clumsy, but this is one case where actions definitely speak louder than words. These men are not especially remarkable or heroic, but their inherent decency puts them heads above the rest. They are soon joined by Nola (Greta Scacchi), a middle-aged prostitute longing to escape the horrors of her own life, and now serve as saviors to six lost women.

As Print, Robert Duvall exudes a gentle sweetness that makes you want to sit by his knee like a loyal dog. Reserved and sometimes distant, Print seems awkward when it comes to matters of the heart. One assumes that this is due to machismo and naiveté, but his past is full of tragedy and heartache. Tom too possesses a stubborn sense of moral uprightness, and Henry wants no part of the nasty underbelly of the Wild West. These three men have every opportunity to take advantage of their situation, but they behave with absolute dignity. No wonder Nola wants to marry Print after only a few days, and #1 gradually takes a shine to Tom.

Though the film builds to a satisfying, if bittersweet, conclusion and offers up plenty of Old West action, suspense, and social commentary, I was sad to part ways with the travelers in Broken Trail. Like the other girls, I was left looking longingly at the screen, thinking, “Take me with you”. I would have been happy to follow these characters forever.