The “Queen of Country Music” Loretta Lynn has a true-life story made for the movies.
By Lindaon November 18, 2012
0 Comments
Our Rating 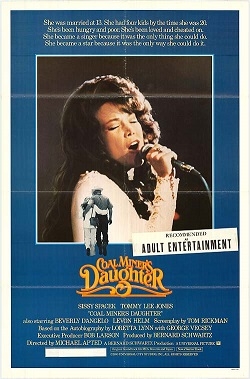 You know, I get more and more respect for Sissy Spacek as an actress, the more of her work I see… she really is so hugely talented. She won an Oscar for her 1980 portrayal of Loretta Lynn in Coal Miner’s Daughter—she even did all of her own singing in the film—and this only a couple years after she made the horror film Carrie. It must have been a shock to critics and audiences.

The “Queen of Country Music” Loretta Lynn has a true-life story made for the movies. She was born in a coal mining town in Kentucky, got married when she was 13 to a charming soldier boy who took her away, had four kids, then suddenly discovered her talent for singing. Pretty much, she is one of those singers that made it by sheer force-of-will. In the film, when she makes it to the Grand Ole Opry in Nashville, she even feels a bit guilty because she didn’t think she had paid her dues as a struggling singer.

Spacek easily carries this extremely watchable film (which some critics consider the best “bio-pic” ever made). A young Tommy Lee Jones plays her charming husband Doolittle, who initially acts as her manager, partner, husband, and caregiver to their kids as her career takes off. Beverly D’Angelo steals every scene she’s in as an extremely saucy Patsy Cline who befriends Loretta early in her career. And Levon Helm (drummer for The Band) plays Loretta’s dad with nobility and restraint, in a role that could’ve been dismissed as a hick with a heart of gold.

After watching this movie, you won’t be able to resist the urge to flip through Loretta Lynn’s many many albums (with over 25 number one hits) next time you’re at the record store. The story in Coal Miner’s Daughter is all the more fascinating because it’s true.

Now this is one film that is ripe for a 25-year retrospective, and this DVD delivers. All the major players are represented in the extras, and director Michael Apted serves as a sort of tour guide to the reflection on the film. Apted and Sissy Spacek do a feature-commentary on the film, plus there are also new 10-minute interviews where Apted chats with Tommy Lee Jones, and Loretta Lynn, respectively. Apted’s warmth and experience as a documentary filmmaker shows in these interviews, as he knows how to steer the conversation with gentle prodding while adding his own anecdotes. Loretta Lynn, now in her seventies, is still as feisty as portrayed in the film.

There are quite a few interesting tidbits revealed in the extras, including the fact that Loretta Lynn herself chose Sissy Spacek to play her in the film, simply by choosing her 8″ x 10″ glossy photo from a stack. Spacek said no, no, and no, until she asked for a sign from God—the answer immediately came in the form of the song “Coal Miner’s Daughter” coming on her car radio.

The only throwaway extra included on this disc (and one of the stranger add-ons I’ve ever seen) is “President George Bush Sr. salutes AFI and Coal Miner’s Daughter.” This is a short speech that Papa Dubya gave to the American Film Institute in 1989 in honor of the Institute’s 25th anniversary. He schmoozes with the celebrities with name-dropping, mentions Coal Miner’s Daughter only by name in a list of great American films, then proceeds to tell the audience of the importance of films like Lean on Me and Clean & Sober in the fight to keep children off drugs. Huh? “God bless you, and God bless the United States of America!” he concludes. Well, alright. 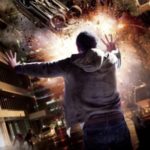 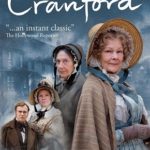