My lingering impression of Dark Shadows is that it will best be remembered as the source of one of the most popular Halloween costumes of 2012.
By Kimon November 21, 2012
0 Comments
Our Rating 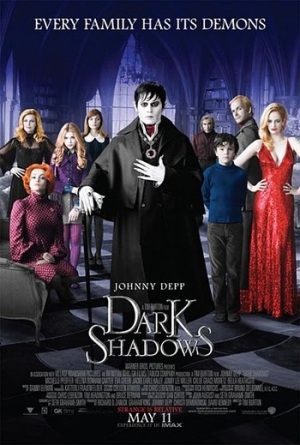 Dark Shadows is the latest installment in the Johnny Depp-Tim Burton bromance, and if either or both of those names cause you to swoon, then you really don’t need to read this.  You KNOW you will see this movie.  I count myself among Mr. Depp’s many, many girlfriends, and frankly, Johnny could play a carrot in a preschool play about nutrition and I’d run to see it.  That said, my lingering impression of Dark Shadows is that it will best be remembered as the source of one of the most popular Halloween costumes of 2012.

Loosely based on the long-running 1970s television soap opera Dark Shadows, the movie is the story of Barnabas Collins (Depp).  Once the scion of a rich and powerful Maine clan that made its fortune in canning fish, Barnabas has spent two centuries in a box after angering a witchy blonde seductress, Angelique (Eve Green) who, after Barnabas spurns her for the beatific Josette (Bella Heathcote), turns him into a vampire and convinces a mob of locals to dump him in a coffin bound with chains.  (Before this, Angelique kills Ma and Pa Collins and causes Josette to fall to her death from a rocky promontory near the Collins’ not-so-humble estate.  Angelique is not a nice lady.)

Flash forward two hundred years to 1972.  Freed from bondage, Barnabas returns to Collinwood Manor to restore his family to fortune and glory.  The current Collins family lineup includes Elizabeth Collins (Michelle Pfeiffer), her teenage stoner daughter Carolyn (Chloe Grace Moretz), Elizabeth’s brother Roger (Jonny Lee Miller), his disturbed son David (Gully McGrath), David’s live-in shrink Dr. Hoffman (Helena Bonham Carter, in a maraschino cherry-colored wig) and two servants, the drunken and somewhat shriveled Willie (Jackie Earle Haley) and the apparently senile Mrs. Johnson (Ray Shirley).  Two other characters round out this collection of oddballs: Victoria Winters (Bella Heathcote again), who has traveled to Collinwood Manor to be David’s governess, and the owner/dominatrix of Angel Bay, a fish canning empire whose success has decimated the Collins’ family fortune.  And who is this owner?  Why, Angelique herself, in all her peroxided busty glory.

The plot is predictable, what there is of it.  Barnabas encounters the 1970s in all its perverse glory – Alice Cooper! Lava lamps! A herd of dumb hippies! – and has a crazed sexual encounter with Angelique, who still carries the torch for him. Barnabas must destroy Angelique to save the Collins family, and in the meantime falls in love with Victoria, who looks so much like his lost Josette that you’d think they were played by the same actress, and… well, that’s pretty much the plot in a nutshell.  But this movie, like most Depp-Burton outings, isn’t about plot.  It’s about the characters, with the most fun being our boy Barnabas, played by Depp with his usual mix of camp, sweetness and eye makeup. He flutters his fingernails in a gesture that will surely be repeated by young and old alike this October 31 by thousands of imitation Barnabas Collinses.

As in all Tim Burton movies, the stylistic details are pitch-perfect. Collinwood Manor is a dark Disney fantasy castle with secret passages galore, and everyone wears the type of amazing 70’s clothes that no one in the 70s actually wore.  Unlike other Depp-Burton adventures, however, the substance of Dark Shadows never matches its style.  See it for Johnny, if you must, but you may be better off watching Sleepy Hollow or Edward Scissorhands again.

For the full Dark Shadows experience, you’ll want the Blu-ray/DVD combo pack, which also comes with an Ultraviolet copy of the film for streaming to your mobile device or player. The extra features can be found on the Blu-ray copy, and can be viewed as “focus points” throughout the film or individually from the main menu. In typical Tim Burton fashion, the featurettes find us chatting cozily with the cast and crew as they detail the making of the film. Watch as set designers construct Collinsport from the ground up, make up artists transform Mr. Depp into Barnabas Collins, and Tim Burton attempts to recreate the 1970s on film. There are featurettes on Angelique the witch, Alice Cooper the rock star, and the history of Dark Shadows itself. No stone is left unturned, and we’re even treated to five deleted scenes. While certainly enjoyable the first time around, Dark Shadows seems destined to develop a cult following in the years to come. 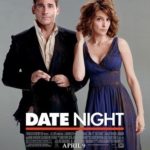