One of the nice things about having a media pass to Hot Docs is the ability for the passholder to change his or her mind on the fly. Because there’s no need to book tickets in advance, you can just see where the day (or your mood or the weather) takes you, and switch your schedule around as you see fit. As such, I think I must have rearranged my film-going sked for yesterday at least four times before settling on the trio of screenings I wound up attending. And, for the most part, I picked winners. 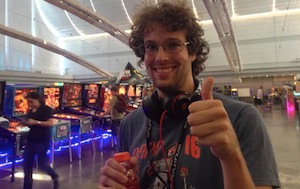 The day started with Wizard Mode (7/8), which turned out to be the kind of small, personal, heart-swelling documentary I love. Though Hart House was sparsely populated, the audience in attendance was treated to the utterly charming story of Robert Gagno, a 26-year-old on the autism spectrum who loves hugs and high-fives… and who’s also a world-champion pinball player. Filmmakers Nathan Drillot and Jeff Petry spend what seems like a year or so following Robert – who’s blessed with truly awesome parents and an even more awesome attitude – as he attempts to best his previous pinball-tournament results while simultaneously learning to become more independent. Though the audio mix was a bit iffy in spots (with the score drowning out some of the dialogue), the film has a rollicking soundtrack and some super-cool graphic treatments. It was a wonderful character study of an upbeat, positive, totally relatable young guy whose struggles with things like anxiety and loneliness are universal, thereby making them film – like its subject – equally accessible for anyone, autistic or not.

Now. My second film of the day was a lot less heart-swelling and a lot more eyeroll-inducing. I’ll begin by saying that one of my Hot Docs pet peeves has always been directors who plead and pander for Audience Award votes at their screenings. It drives me nuts. Let your work speak for itself, please don’t beg for votes. Even worse are the ones who do so before their film has even screened.

So, it wasn’t a great sign when the filmmakers behind The Age of Consequences (2/8) did exactly that during their introduction – going so far as to say (I’m paraphrasing), “If you’re not giving us a 5, just tear up your ticket into little pieces and throw it away.” Wow. Ballsy. Immediately, I knew I wouldn’t be voting at all. Thankfully, I suppose, my vote (had I cast it) wouldn’t have helped anyway, because I found Age to be exhausting, obnoxious, repetitive, over-the-top and so filled with pro-U.S. military shilling that it felt like I was watching a recruitment or propaganda film.

The doc’s premise is simple: climate change around the world is a precursor to global unrest and the potential decay of societal structure. That is, its ramifications include the usual – environmental damage, depletion of natural resources, etc. – but also include war, migration, wars caused over migration, wars caused by the depletion of natural resources in a given region, wars caused over migration caused by the depletion of natural resources in a given region… and so on and so on. Honestly, the film made its point within the first 15 minutes or so, and then continued to hammer it home with anvil-like subtlety for another 60-odd minutes. Over and over again, with countless talking heads all weighing in… and the underlying message (of what the filmmakers very clearly want you to view as their Extremely Important and Serious Film) seeming to be: the U.S. military will save the world! Every nation should follow the initiatives being put in place by the U.S. military! U.S. military veterans continue to do good work once their tours are complete! GO U.S.A.!

With a bombastic score that actually made me laugh on occasion because it was so hugely DRAMATIC, and a tedious narrative structure virtually devoid of hope but overflowing with clips of (you guessed it!) the U.S. military, sitting through this one as a Canadian was a chore. I lurrrrve environmental docs and have seen some great ones at Hot Docs over the years (Waterlife, Last Call at the Oasis and Divide in Concord, to name but a few). This one will not be added to that list.

Last up were two exceptionally awesome films. When the fest moderator introduced the filmmakers before the screening, I thought, “Wait a second. Those guys look familiar. Aren’t those the dudes who directed Wizard Mode?!” Indeed, Wizard’s directors Nathan Drillot and Jeff Petry had also made a short that would precede the evening’s feature. And, once again, the duo produced a winner. 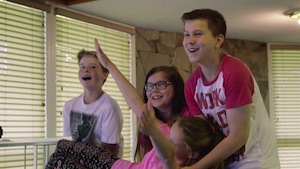 Handsome & Majestic (7/8) was a lovely portrait of Milan, a teen trans boy living in Prince George, B.C. Milan and his parents reflect on his coming out and their coming to terms with their daughter transitioning to become their son. Heartfelt, moving and inspirational, the short was exactly what short docs should be, IMO: a small story with a big impact. Kudos to Drillot and Petry for finding (in both their feature doc and this short) two amazing subjects and, even more importantly, two incredible, loving and supportive sets of parents.

I love ending the day on a high note, and Suited (7/8) allowed me to do just that. Profiling Bindle & Keep tailors Rae Tutera and Daniel Friedman, whose bespoke-suit company caters to the LGBQT community (and, often, trans customers unable to find well-fitting clothes off the rack), this excellent, informative and transformative (pun intended) doc introduced a number of the pair’s clients as they arrive for fittings, discuss their personal circumstances and, ultimately, slip on their new suits for the first time. In a nutshell, the film was a fabulous look at stunning clothes made by kick-ass tailors for beautiful people with wonderful stories. 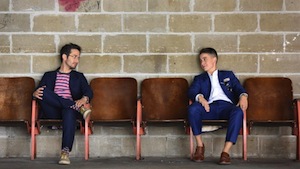 The care, attention and compassion Tutera and Friedman demonstrated with each client was incredibly moving, as were the clients (who range from a trans boy preparing for his Bar Mitzvah to a middle-aged attorney looking for something to wear to try her next big trial) themselves. Here, a suit is so much more than just an item of clothing. Watching the customers see themselves in their suits for the first time, and how meaningful the experience is for all involved, was incredible. On an emotional, thematic and degree-of-satisfaction level, it was the perfect bookend to the day’s first film.