Bruised superheroes drink a lot and act stupid in front of their friends. They also pity themselves and whine a lot. Come on, Iron Man! The clock is ticking! Not only in the plot, but on that watch right there on my wrist!
By Lindaon May 1, 2013
0 Comments
Our Rating 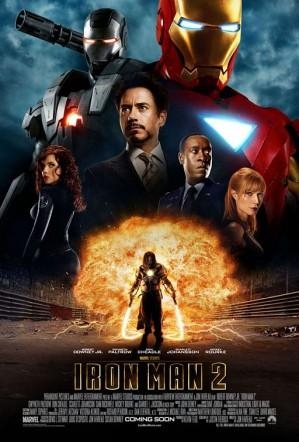 I enjoyed Iron Man for what it was, a sort of snarky super-hero movie that actually starred adults for a change. Robert Downey, Jr., with his affected narcissism, was a total hoot and completely made the movie. And when I saw the trailer for Iron Man 2 several months before the film’s release? Heck, even I was excited.

Iron Man 2 starts of well enough, with some crotch-grabbing AC/DC (is that “Shoot to Thrill”???? YESSSS! [holding up devil horns in appreciation]) as Iron Man flies about town in his superhero Iron Man suit, only to land on a stage in front of an adoring audience, surrounded by his own Iron Man go-go dancers. Really. If it were anyone but Robert Downey emerging from the suit, it would be totally cheesy, but of course he makes it hilarious, and it works. See, at the end of the first movie, his playboy billionaire Tony Stark revealed that he was Iron Man—now he is working the adoring crowd, nay, the adoring country, in his new role as superpatriot and one-man weapon. One-man weapon, did you say? Of course the government wants a piece of his action, namely his suit.

In the meantime, there is a greasy, gold-toothed Russian played by greasy gold-toothed Mickey Rourke, who watches Tony Stark’s media circus from always snowy and cold Russia. He’s a mad physicist and inventor himself, and he has something to settle with Tony Stark, something from their past that ties them together… So Ivan starts pounding on metal, wearing welding goggles, and hooking up electric things, as men are wont to do in movies like this.

The first showdown between Ivan and Tony Stark/Iron Man is great (and was hyped up in previews for the film), taking place on a race course in the middle of Monaco. Ivan has revealed that his fancy suit has electric whip extensions from his arms, with which he can cut a car in half with one crack. Wooo! Super-cool, and super-scary! He sure is a menace! What a great bad guy!

But then the movie gets distracted.

Ivan is sidetracked from the center of the plot, and Tony’s ego is bruised. Bruised superheroes drink a lot and act stupid in front of their friends. They also pity themselves and whine a lot. Come on, Iron Man! The clock is ticking! Not only in the plot, but on that watch right there on my wrist!

With the introduction of several new characters—like the mysterious Natasha Romanoff (Scarlett Johansson) who not only looks hot as a secretary, but super-hot kicking ass in a sleek cat suit; Nick Fury (Sam Jackson), who doesn’t seem to have powers (from what this non-fangirl can tell) but wears a cool long leather jacket; and Justin Hammer (Sam Rockwell), who is a power-mad weapons manufacturer—well, there is a lot going on, without a heck of a lot going on. Oh, and Tony Stark’s best friend Lt. Col. James Rhodes is now played by Don Cheadle. Tony and Jim don’t have a heck of a lot of chemistry together, but if they say they are best friends, well, then, I guess they are.

By the time the action gets going again, it feels kind of after the fact. In fact, Iron Man 2 feels like one of those “bridge” movies, connecting the origin story of Part One, and something exciting happening in Part Three. I’m not saying that the script isn’t funny. It is. There are a lot of great one liners, and Sam Rockwell in particular has a hilarious scene where he lovingly introduces one weapon after another. But other than that, the plot is kind of a big shrug. Even Mickey Rourke’s character, after such a great first impression, runs out of steam in the story (through no fault of his own). There are lots of things that go boom, and it is fun to watch, but afterward I don’t think I was the only one leaving Iron Man 2 with a smile followed by a shrug.