The Wachowskis have put together a cutting-edge collection of great Japanese animation exploring their dark vision of mankind’s future.
By Ericon May 6, 2010
0 Comments
Our Rating 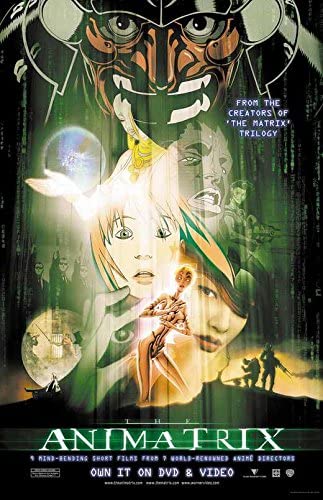 Synopsis: Helmed by world-renowned anime directors, The Animatrix is a collection of nine original short films conceived by the Wachowski Brothers, the creators of The Matrix. This spectacularly visual series delves deeper into the mind-bending world of The Matrix and the characters that inhabit it, resulting in an unprecedented fusion of CG-animation and the anime style pioneered by Japanese animation artists.

Review: In what you will consider to be either a shameless marketing ploy or a brilliant experiment, The Animatrix is a collection of nine animated short films commissioned by the Wachowskis that explore the hugely popular mythology of The Matrix. Since you can count me in on the apparently few who were blown away by The Matrix Reloaded, you could probably have guessed that I would have a similar reaction to The Animatrix. I would even postulate that those who were disappointed by Reloaded will find much more to like in this compilation.

The Wachowskis themselves co-wrote some of these shorts, but for the most part the creative control was in the hands of the animators. Japanese animation has experienced a surge of popularity lately, and I have been far from impressed by most of it, but I found most of The Animatrix to be not only mind-bending, but fabulous to look at—each film has a distinctive visual style to it that’s interesting even when the stories are a bit, er, lacking (World Record, Matriculated).

My favorite was by far The Second Renaissance, a detailed two-part account of how machines came to rule the Earth and the creation of the Matrix. (You can watch these two segments and two others in their entirety on the Animatrix website, though it can’t compare to seeing them on the big screen.) Other audience favorites were Beyond, in which a group of kids explore a “haunted house” formed by glitches in the Matrix, and Kid’s Story, which fleshes out the story of a character who only appears in one scene in Reloaded.

The Wachowskis have put together a cutting-edge collection of great Japanese animation exploring their dark vision of mankind’s future, and the bottom line is, it’s simultaneously short attention span-friendly and genuinely provocative. And that is always a good combination.