9 is a gorgeous and weird post-apocalyptic animated film, a world where life was obliterated after the rise of the machines, and where scared little robots just may be the future of the human race….
By Lindaon March 16, 2014
0 Comments
Our Rating 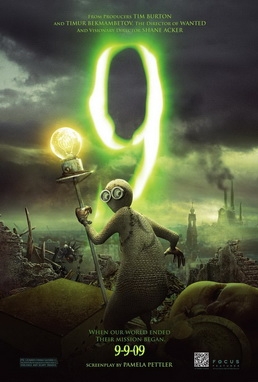 At first you may see glimpses of Coraline in this film (the stitching of the doll/robot at the beginning), or any Terminator movie (the apocalypse was caused by a war between machines and the humans who made them), or even WALL-E where a scared little robot picks his way through devastation. But soon you start to forget, because simply put, the CGI animation in 9 is completely fantastic.

When the little burlap robot-doll awakens, he finds himself alone in a dead world. He tucks a round device that he finds next to him into his belly-pouch, and goes in search of… something. He soon encounters another, a similar critter who approaches and speaks to the fearful little robot. Turns our that our hero has “9” written on his back, and he has been discovered by “2” (Martin Landau). With 2’s help, 9 is given a voice (that of Elijah Wood) and meets the few others… but first 2 is abruptly taken, violently taken, by The Beast, which resembles a huge, scary Terminator cat-skeleton. Yikes.

The leader of the little group is 1 (Christopher Plummer) who is crotchety, defensive, and leads with a fist (well, his sidekick 8’s fist). When 9 insists on saving his new friend (“He was still alive!” he claims), 1 forbids it. Too dangerous. But you know that 9 will go on his own Lord of the Rings-style quest to save his friend, and cause much MUCH more trouble in the meantime. And the quest also provides some answers: who are these little robots, and why have they survived?

Like I said, 9 is a fantastic-looking movie. It has a sci-fi/fantasy plot that keeps you guessing, but then suffers a bit by seemingly having more than one climax (even for a short film!). Just when you think it’s over… it’s not! Now….? No! And again! But that didn’t really bother me, because I was enjoying the look of the film so much.

Amazing, wonderful detail is put into the expressions of the characters (they’re burlap and metal, fer chrissakes!), and the voice actors all do a fine job (including John C. Reilly as 9’s main buddy 5). And the ending (when it finally wrapped up) even got me a little weepy, as it was surprisingly moving.

But heed my warning: 9 is rated PG-13 “for violence and scary images,” and that’s no joke. There are some truly frightening moments in 9 that could have easily ended up in my nightmares. Just when you get attached to the little guys, one of them gets offed in a super-creepy sci-fi way that I don’t want to spoil. Let’s just say, it is best to avert your eyes, in more ways than one.