While I laughed often, and enjoyed the look of the film, I kept fighting a nagging feeling that I would have enjoyed reading the books more.
By Lindaon December 3, 2013
0 Comments
Our Rating 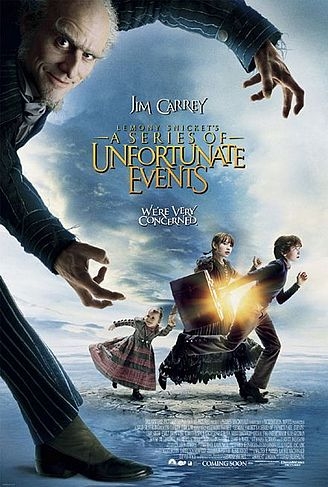 Why do I get a sneaking feeling that I’m going to get flogged for this review? Will this movie be embraced by kids and adults alike, and will I be dismissed and chastised for not being able to enjoy a movie for what it is? The other folks at the theater seemed to love Lemony Snicket’s A Series of Unfortunate Events, and I did enjoy many things about the latest popular kiddie-book-series to be flung onto the big screen. Yet, while I laughed often, and enjoyed the look of the film, I kept fighting a nagging feeling that I would have enjoyed reading the books more.

The Baudelaire kids are a brooding and clever bunch, and are unfortunate enough to be struck with an unfortunate series of really unfortunate events. You see, their parents just perished in a horrible fire, and they are sent to live with their “closest” relative (closest, relative to their ashen home, that is), and it is, unfortunately, Count Olaf, who is, fortunately, played by Jim Carrey. Violet (the inventive one) and Klaus (the bookish one), don’t know what to make of this weird, but very obviously greedy uncle. Toddler Sunny (via hilarious subtitles to her babbling) tells us in no uncertain terms that Olaf is up to no good, and the audience can’t wait to see what sort of wickedness Carrey can come up with.

Based on the first three Lemony Snicket books, the film feels not only chapter-like, but has three distinct parts. The formula of threes is tried and true in storytelling, but it actually feels like three stories glued together in order to fill a two-hour period. After Olaf tries to kill the kids for their inheritance (yes, KILL… the film is pretty dark, as funny as it is), they end up staying first with a kindly, snake-charmer uncle (Billy Connolly), then with a scattered and nervous, yet good-hearted aunt named Josephine (played by the surprisingly not-quite-on Meryl Streep). Book Three ends the film, and the film doesn’t end with much of a conclusion… except that there can be more movies (of course).

A Series of Unfortunate Events is really a fantastic-looking movie. The set designers had a field day, coming up with the most outrageous creaking mansions and cliff-tottering shacks, among other things. Jim Carrey is always entertaining (there is a weird moment where he imitates a feeding dinosaur, of all things, at a party… it still cracks me up to think about it), and the kid actors are fine, if not particularly memorable. But if a baby steals the movie, and the closing credits were my favorite part, I can’t help but doubt the film as a whole. It made me want to read the books instead of mark my calendar for a sequel.

Note to the filmmakers: Oh, to tease us with mere snippets of the band of sidekicks played by the communally fabulous Jennifer Coolidge, Luis Guzmán, and Jane Adams! Shame on you for casting them in the movie, and then barely giving them anything to do. For the love of all that is holy, they are too good for cameos, and should not be wasted! 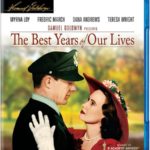 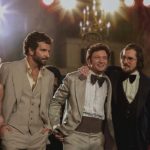