Babylon A.D. seems confused whether it wants to be a straight-on sci-fi film, an action thriller, or a futuristic religious statement.
By Lindaon February 8, 2014
0 Comments
Our Rating 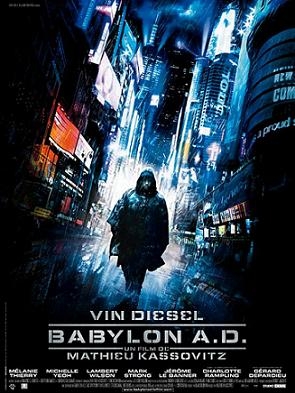 Babylon A.D. has an interesting sci-fi premise, mixing religious hope with what looks like the end of the world, features a bunch of cool international actors (like Michelle Yeoh and Charlotte Rampling), and stars a thuggish action star (Vin Diesel) for those who need and want to see shit blowing up. But the story is muddled and always feels strangely derivative, like bits and pieces and chunks of other (better) futuristic films.

It is the vague future, where a wasteland of urban civilization seems to be the norm. You know, where borders have collapsed and redrawn themselves, creating new outposts like New Serbia, where tanks roll down the street, street urchins hide in the shadows, and the most unassuming of folks peddle the nastiest of machine guns on the black market.

Vin Diesel plays a mercenary named Toorop who lives by the mantra: “Life’s simple. Kill, or be killed.” He is hired by a Russian mobster (Gerard Depardieu?!?!) for an unusual job. He has to deliver a beautiful young woman from a mountainous convent to New York City. This is alluring for him, because he just wants to go home… after all, it is impossible to get into the U.S. without an electronic passport that is installed inside your neck (nice!). This hot young thing named Aurora (Mélanie Thierry) comes with a guardian nun named Sister Rebeka (Michelle Yeoh), and it only takes a couple sticky situations in their dangerous mission for Toorop to realize that Sister Rebeka can kick some serious ass.

By the time that Toorop and his charges make it to the big city, they all realize that it may not be have been a good idea after all. Aurora is very important for this certain religion, but it only becomes clear for what reason too late. Ooops. You see, Charlotte Rampling, in her exquisite droopy-lidded Frenchness, has been waiting for the delivery of Aurora to make her self-made religious domination complete. She’s not messing around (as she shows by smacking a henchman upside the head, and spitting, “I’m sick and tired of your damn excuses!” when he fails, yet again, to bring the girl in). Toorop finds that he may have to save the young woman from the very people he promised to deliver her to.

Babylon A.D. seems confused whether it wants to be a straight-on sci-fi film, an action thriller, or a futuristic religious statement. In theory, it could and should be able to be all those things, but it fares poorly by attempting all those genres half-assed. In the extras, it is stated that Michelle Yeoh was hired to bring soul to the film, as she does so effortlessly. But she gets little to do other than follow Vin around, haul the girl along behind her, and occasionally kicks some ass. There’s lots of action and cool visuals, but alas little substance to Babylon A.D. And, I might say, very little soul.

Among the more interesting extras on the DVD are an extended interview with French-born writer Maurice G. Dantec (who wrote the story on which the film is based), who says things like, “What happens when the stars meet in the mud? That’s Babylon Babies!” (huh?); “Arctic Escape” introduces us to the crazy snowmobilers who created some of the more impressive stunts (extreme snowmobiling? who’da thought!); and the curious “Prequel to Babylon A.D.: Genesis of Aurora” is a five-minute animated piece in a very basic storyboard style (is this a tease fore a feature-length prequel? I wouldn’t think that Babylon A.D. made enough money…), which explains a little bit of the background and reasoning behind Aurora’s origins.