Whether or not you have a little Napoleon in your life, you’d have to be brain-dead not to appreciate the humor of the universal asshole found in all teenagers.
By Lindaon June 10, 2014
0 Comments
Our Rating 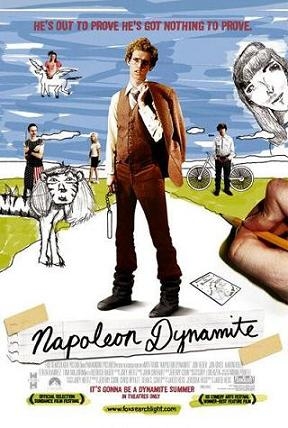 Napoleon Dynamite is so flippin’ funny I can hardly stand it. I have no shame—I don’t care if Spielberg directed it. But I should preface all this by confessing that part of my giddy delight comes from the fact that our hero, Napoleon Dynamite, strongly resembles my socially inept younger brother.

Like Napoleon, my brother has perfected the Inaudible Mumble, the Inappropriately Angry Response To An Innocent Question, and the Outrageous Request For Others To Drop Whatever They Are Doing And Drive Across Town For Some Completely Ridiculous Reason. These things, plus the uncanny physical resemblance, had my husband and I rolling in the aisles.

And like my brother, Napoleon suffers from delusions of martial arts grandeur and his idea of a compliment goes something like: “I see you’re drinking 1% milk. Is that because you think you’re fat? Because you’re not. You could probably be drinking whole milk.” Needless to say, it’s Napoleon’s lack of social skills (not nunchuck skills, as he believes) that holds him back in the challenging world of high school politics. He hates everyone and everything. His perpetual exasperation and totally unacceptable response to the people and llamas around him is simply hysterical.

But on to the actual story…. Our unfortunately named hero lives in present-day rural Idaho. Were it not for the mention of internet chat rooms, you might easily assume that the film takes place in 1983. But no. The costume and music choices sadly show just how behind-the-times small towns can be. The plotline is fairly subtle. Napoleon lives with his geeky brother, Kip, and endures the temporary presence of his smarmy uncle, Rico, while riding bikes with his apparently brain-damaged best friend, Pedro. The genius of this movie is all in the characters, every one of which is flawlessly conceived and performed.

Tracking Napoleon through a few weeks of high school hell, a kind of alternative Revenge of the Nerds story emerges. Napoleon strikes up an awkward romance with a strange girl who tries to sell him an amateur Glamour Shots photo session and together they set out to get Pedro elected as class president.

I can’t say too much more without revealing the jokes that you will so relish discovering throughout this absurd story. I’ll leave you with the enticing thought of two horrendous hair pieces and not one, but two sign-language dance sequences to enjoy. And in what may be an homage to the 80’s culture in which he is trapped, Napoleon also uses the power of dance to overcome his fear and change the course of his high school career. You won’t forget it.

Whether or not you have a little Napoleon in your life, you’d have to be brain-dead not to appreciate the humor of the universal asshole found in all teenagers. It’s the nerdy jerk in all of us that Jon Heder portrays so well as Napoleon Dynamite. You won’t get an explanation of his bizarre moniker. And there’s no mention of where his parents might be or why he is… well, the way he is. It’s just a-day-in-the-life kind of story, which you will probably find utterly side-splitting.

Roger Ebert thought the folks at Sundance only laughed at this movie to avoid appearing uncool. Yeah. Right. If you don’t find teenage social bungling amusing and you don’t find humor inherent in the Future Farmers of America organization, then maybe you won’t like this film. I can’t imagine it, but I guess it’s possible. I think the characters in this film are genuinely, unavoidably, and brilliantly funny. It takes a special kind of sourpuss not to laugh at them. Vote for Pedro!

The special 10th Anniversary Edition of Napoleon Dynamite includes the Blu-ray and a double-sided DVD (one side with full-frame, pan and scan… does anyone request that anymore?). You get the commentary by director/co-writer Jared Hess, John Heder, and producer Jeremy Coon, plus an additional cast commentary with Aaron Ruell, Efren Ramirez, Jon Gries and Tina Majorino. There are deleted and extended scenes, stills, a featurette about “The Wedding of the Century”, and a hidden fan club piece. Kind of interesting is a relatively long-ish “non-linear” doc about Jared Hess, before and after the film premiered at Sundance, which reveals how many funny scenews came directly from goofy incidents in he and his wife (and co-writer) Jerusha Hess’ lives. Best, though, is the inclusion of the original short “Peluca”, where the character of Napoleon was born. 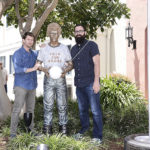