Step Up 2: The Streets

It doesn’t hurt that by the final scene all the stars are wet when they take their routine to the rainy streets. 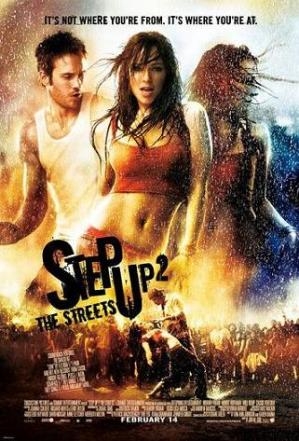 We’ve all seen this plot before: Outsider rebel kid gets in trouble one too many times. S/he is going to get sent off to reform school/Japan/Texas unless… said kid proves their mettle in a school/branch of the military where they sure as heck don’t belong. But hey, after a fist-fight/dance-off/car-race, it turns out that the folks that s/he disdained from a distance may not be so bad after all!

Step Up 2: The Streets‘ token rebel is a teen white girl named Andie (Briana Evigan). She and her crew (or is it “krew”) of rebel dancers (the “410”) have brushed the law one too many times with their anarchic dancing (OK, I just coined that myself… not sure what to call their burst of public dancing disruption). Her guardian (her deceased mom’s best friend) says, “That’s it! You’re going to Texas!” (see?). The horror proves too palatable, so Andie agrees very reluctantly to try to shape up and go to the Baltimore’s local Fame school to do some “serious” dancing to avoid that punishment that is worse than hell.

Beyond the nifty opening sequence of the 410 disrupting a subway ride with a dance explosion, the first part of Step Up 2 is pretty weak and predictable. Andie first meets and befriends the school outcast, a floppy-haired kid named Moose (the adorable Adam G. Sevani) and immediately becomes a love interest for the popular white boy, with the Pretty In Pink rich-boy name of Chase Collins (Robert Hoffman). Oh, you just know that Chase, fine classic dancer that he is, wants to be a rebel like the new girl, but is held down by the fact that his older brother Blake (Will Kemp), a washed-out professional dancer, happens to be the head of the school!

Andie and Chase are as bland as butter, but the film starts to pick up when they (with Moose) pull together a ragtag group of multi-ethnic kids to form their own dance crew. There is virtually no character development for any of the other kids, alas, but when these young people start dancing, the film is on fire. You see, after Andie and her new crew are humiliated in a dance-off with her ex-pals the 410, they vow to get their revenge at the famed underground dance competition known as “The Streets”… oh yes they will!

At this point, Step Up 2: The Streets turns into something else entirely. If you are interested in modern hip-hop, breakdancing, and street dance, but have little toleration for cliche-driven plots, go ahead and skip the first hour or so of this film. If you need to watch any of it, in fact, just watch the last 20 minutes or so when The Streets competition takes center stage. The dancing that goes on in these dance-offs is utterly phenomenal! The moves are gravity- and logic-defying, and will make shake your head in disbelief. Beyond impressive. And of course it doesn’t hurt that by the final scene all the stars are wet when they take their routine to the rainy streets.

If you like dance films, this movie is certainly worth checking out. In fact, I was this close to giving it a recommendation in my rating, but the unfortunate blandness of the two romantic leads (some of the only white kids in the film) sucks the spark out of the non-dancing scenes. But the DVD offers plenty of worthy extras, including music videos of songs featured in the film (by folks like Missy Elliott, Flo Rida, and Cherish), profiles of the dancers that made up the 410, a making-of featurette, outtakes, and deleted scenes (featuring some more dance footage).