Mr. Brooks isn’t just a movie, it’s a time machine. All you need to do is dim the lights and settle in, and you’re magically transported back to 1990… the last time three of this film’s four stars had relevant, bankable careers and an audience that actually had any interest in watching them on the big screen in this kind of ‘90s-era, fromage-laden thriller.
By Pie Pal Vickieon June 7, 2014
0 Comments
Our Rating 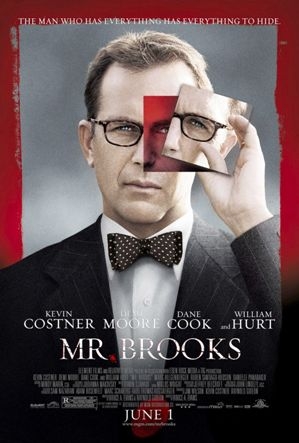 More than that, though, Mr. Brooks looks to be the best worst movie that will be released in 2007—it is so spectacularly bad that it’s almost brilliant in its crappiness and I fully expect it to clean up at next year’s Razzie Awards. I was tempted to leave this review to Moviepie’s Eric, whose analytical mastery when dissecting bad movies is unparalleled, but there’s so much fodder for discussion that I’m sure we could both write about it and still have material left over.

The first 15 minutes of the film sets the absurdist tone and tells you everything you’ll need to know in order to enjoy the ridiculousness that follows. The supremely miscast Kevin Costner is cardboard-box magnate (that’s right, he’s made a fortune manufacturing boxes) Earl Brooks. I will wait while you make your own Costner-cardboard jokes. Earl has a loving, non-entity of a wife played by Marg Helgenberger, and her sole purpose in the film seems to be set dressing. But piles of money and a comely missus aren’t enough to satisfy Mr. Brooks—he’s also a serial killer and no, his modus operandi isn’t boring his victims to death. Instead, Mr. Brooks fancies himself an “artist,” who throws clay as a hobby and takes artsy photographs of his murder victims after he shoots them in the face and rearranges the bodies. [At this point in the film I wasn’t sure which was the more frightening concept: Kevin Costner killing people or Kevin Costner making art.]

Oh, I’m sorry, did I forget to mention that William Hurt stars as Marshall, the homicidal voice inside Mr. Brooks’ head, who manifests himself in the form of, well, William Hurt? Standing and sitting and walking and talking with Mr. Brooks, just like another character except for the fact that, you know, he’s invisible and Mr. Brooks is the only person who can see him? Seriously. Marshall is occasionally referred to by Mr. Brooks as a sickness or a disease, but he’s like the world’s most destructive imaginary friend. It’s Marshall who, like a demented enabler, encourages Mr. Brooks to kill because it’s Marshall who’s got the hardcore bloodlust. As a result, the audience is treated to countless scenes of Mr. Brooks and Marshall chatting, plotting and, best of all when you’re viewing the film as an unintentional comedy, laughing uproariously in a supposed-to-be-psychotic-but-instead-hilarious, head-thrown-back, mwa-ha-ha-haaaa way not seen since the Wicked Witch of the West taunted Dorothy.

Enter Demi Moore as tough-as-nails lady cop Tracy Atwood, a police detective who’s been tracking Mr. Brooks—whom she’s nicknamed “the Thumbprint Killer” for his habit of “signing” his murderous tableaus with the bloody thumbprints of his victims—for years. You know she’s tough-as-nails because she smacks gum (that appears and disappears depending on the scene, the take and the attention span of the continuity person), walks with an exaggerated swagger and doesn’t take crap from anybody. She doesn’t do things by the book, this Tracy Atwood. Hell, no! She’s a loose cannon! She’s put a ton of nefarious nasties with colorful monikers behind bars, but Mr. Brooks has always eluded her. She wants to get him. She needs to get him. It’s like a hunger, and their cat-and-mouse relationship tips its clown hat to Clarice Starling and Hannibal Lecter in a totally cheapened, laughable way. Unfortunately for Atwood, one of her previous collars—the Hangman Killer, so nicknamed because he always hung his victims in public places after their deaths—has escaped from custody and is super-thirsty for vengeance. Throw in a money-grubbing, boy-toy husband (Jason Lewis) divorcing her for a $5 million settlement (oh yeah, Tracy’s also a wealthy heiress!) and you’ve got one lady cop with a very full plate.

You would think that the plot as I’ve described it so far, with the actors involved, would be enough to make a pretty crappy thriller, right? You’d be wrong because the filmmakers have one more ace up their sleeve in the form of manic comedian and sometimes actor Dane Cook, who joins the fray as manic voyeur and sometimes idiot “Mr. Smith.” Mr. Smith likes watching his neighbors have sex and is the sole witness when said amorous couple become Mr. Brooks’ latest victims. The trailers would have you believe that Mr. Smith is ready to rat out Mr. Brooks… but no. Instead, he wants to join in. Much to Marshall’s delight—and, really, he seems to delight in anything remotely twisted—Mr. Smith wants to be an apprentice to the Thumbprint Killer. Fun!

Are you keeping track? Because, by my count, we’ve now got one ballsy lady cop and four murderers (yes, I’m including Marshall). By the time the film finally rolls its closing credits, the number of killers rises to five—possibly six!—thanks to yet another dippy subplot. All this and so much more baloney crammed into under 120 minutes of pure, unadulterated cheese! How can you not be running out of your house to see this right now?!

I have no idea where or when the movie derails, but it’s kind of a goner right from the outset when, to the twitters of amusement from audience members, text appears onscreen—before the film even starts—that warns us the “hunger” has returned to Mr. Brooks. It’s hard to take things seriously after that when it’s so obvious that the filmmakers are trying so very earnestly to be serious. Director Bruce A. Evans has only made one other film—1992’s Christian Slater cop movie Kuffs—and I’m inclined to believe that he didn’t use the past 14 years honing his craft. Mr. Brooks is played out with a collective straight face by all involved, and that just makes it that much better… or worse, depending on your perspective.

The overwrought dialogue and way over-the-top performances do nothing but chip away at the film’s already-flimsy credibility as a thriller. How can anyone be expected to be scared or intrigued or thrilled when you have Dane Cook actually uttering the line, “I have to take a crap so bad right now!”? When William Hurt launches into his umpteenth scenery-chewing rant about the joys of murder, practically licking his chops in anticipation, how can we not burst into fits of giggles? And by the time Costner’s insufferably bland Mr. Brooks takes out his treasure trove of “disguises” (handlebar moustache, anyone?), it’s physically impossible not to throw your hands up in surrender and just laugh out loud.

The casting? With the exception of Hurt, who seems tailor-made for his role (see also: his identical performance in A History of Violence), everyone is wrong. For some reason, someone thought Mr. Brooks being “quiet and unassuming” should translate to “dull and uninteresting.” Instead of Costner, this story should have starred, say, John Malkovich or Gary Oldman or someone who can be quiet and appropriately creepy in a way that sends chills—not yawns—up your spine. Demi Moore was okay, I suppose, but the best actress for the gig? No. And Dane Cook’s spastic Mr. Smith would have been less goofy and perhaps more menacing in the skilled hands of someone like Joseph Gordon-Levitt… though, to be fair, I don’t think I’d want to have JGL stuck uttering the insipid dialogue given to Mr. Smith. So nevermind.

For all its ludicrous posturing as an edge-of-your-seat experience, Mr. Brooks does feature several surprisingly graphic (and LOUD) scenes intended to jar the audience out of its collective slumber. Clearly inspired by Se7en and inserted to prove that this is truly a Serious Scary Movie, those moments feel offensively exploitative and out of place. They don’t serve the story—better to leave such images to our imaginations, which can conjure up far more terrifying scenarios, than to throw in gore for gore’s sake.

All this said, I will wait with breathless anticipation for the world to behold the splendor of Mr. Brooks in all its moronic glory. If this doesn’t become an instant classic alongside clunkers like Gigli, Gothika and Catwoman, I will be very surprised. Enjoy it as a comedy, and reject it as a big-screen suspense yarn. 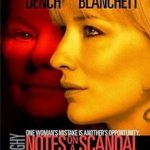 PreviousNotes on a ScandalNextSIFF 2014: Golden Space Needle Awards and other winners