It may sound cliché, but this thrilling mountain-climbing movie had me so far on the edge of my seat that I almost tumbled into the aisle.
By Lindaon May 6, 2014
0 Comments
Our Rating 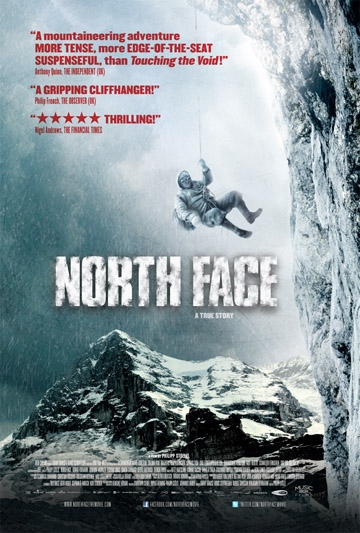 Based a true story, North Face tells the tale of two Germans and two Austrians who attempt to scale the Eiger North Face in the Alps in 1936. The North Face, one of the last unconquered feats in the Alps, would be the jewel in the crown for the Germans, especially if they could do it in time for the Berlin Olympics.

Of the hasty climbers, the German boyhood best friends (Benno Fürmann and Florian Lukas) are obviously more skilled, but they get saddled by their competitors who shadow their climb, getting all involved in a whole heap of dangerous trouble. When faced with danger, do you help your competitors, or go for the gold?

The crazy part is that the whole drama is watched by tourists. Yes, even though the time is the 1930s, Alpine tourism is already flourishing—so within perfect viewing distance of the whole climb is a posh Swiss lodge full of tourists and journalists. While men are dying on the cliff face, the guests casually peer at them through binoculars and telescopes with drinks in hand. When it appears to the journalists that they may not get the story they want, they conveniently pack up their bags and call it good. Nice for them. In the meantime, there is one woman journalist who is the childhood friend of the Germans and has an obvious emotional investment in seeing her friends return, successful or not. And hopefully alive.

North Face has gorgeous cinematography and is an exciting tale for armchair adventurers, as well as fans of tales like Touching the Void and Into Thin Air. The story itself wastes no time getting down to business, and is all the more thrilling because it is an astonishing true-tale adventure (and we all know that those are the best kind). See this on a big screen if you can, because the intimacy and danger will no doubt having you gnawing off your own paw by the end of the film.

The film holds its own, even on a smaller screen. DVD extras include “Visual Effects of North Face” as well as deleted scenes, and the theatrical trailer.