Julie and Me (Revoir Julie)

Re-igniting an old friendship can be hard to do. 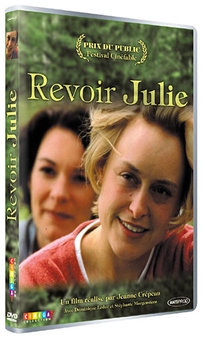 What an odd little film! This French-Canadian film owes a lot to classic French director Eric Rohmer: As in, boy-oh-boy there is a LOT of talking! But the filmmakers have been studying their source carefully: A good “talky” film does not have to be boring.

In Julie and Me we are introduced to Juliet (Stephanie Morgenstern), an urbanite who is going through her ritualistic check-list of cleaning up her life (empty the garbage, write bitter letter to ex-lover, etc.). Last on the list to be checked-off is “Revoir Julie” (go see Julie). Julie (Dominique Leduc) and Juliet were closest friends in high school, but have been estranged for 15 years after Juliet abruptly changed schools and left town. Casually going to see Julie involves a big road trip to countryside Quebec and making awkward excuses about “being in the neighborhood”.

Julie and Me is essentially a two-person play. Julie and Juliet are both obviously very pleased to see each other. They go through the tentative first steps of catching up on 15 years, searching for, then finding again the spark that made them friends in the first place. Except Juliet’s secret is that she harbored a crush on her best friend when they were schoolgirls, which is the main reason that she freaked out and fled town. Now she has come back to resolve her past with her friend.

Like I said, the whole film is pretty much two characters conversing with each other. The conversations are realistic, almost documentary-like, as their re-acquaintance goes through the steps from awkwardness to comfort. Morgenstern and Leduc are excellent in their roles… they are charming and believable as two adult women trying to reconnect a friendship that they both obviously missed. And I have to say, Julie and Me has one of the most hilarious seduction scenes that I’ve seen in a long time.

Unfortunately, the movie around these good performances is quite uneven. The filmmaker throws in these odd snippets that completely throw off the momentum of the film. There are “interviews” with the small-town locals about what they think of Julie. There are Monty-Python-esque animated sequences of morphing classical paintings that goes on way too long. These and other parts made me go, “What the…?” and snapped me out of enjoying the acting of the main characters.

The interplay between the two lead characters is enough to recommend Julie and Me to viewers who like “talky” films where not a lot happens (which, if done well, is OK). Unfortunately I think other viewers would only get restless sitting through this flick. There is enough good things to say about the film though, that I’d be curious to see what director Jeanne Crépeau comes up with next.