If some punk kid came to your business and told you that you were a cheater, well, you’d hire him right away, wouldn’t you? 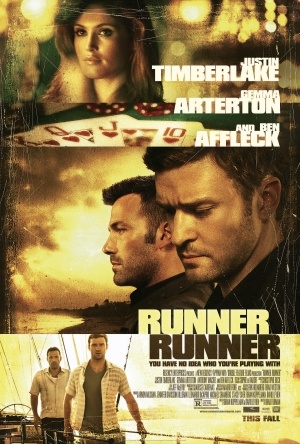 Whenever I see pop-up ads for online poker, I just ignore their flashing relentlessness. Shoot, I never even thought that they were ever considered legit. But the thing is, online gaming is a hugely popular multi-billion dollar industry that the regulators can’t quite control.

Richie (Justin Timberlake), like his poor old dad, is a gambler. He gambled on a career on Wall Street and lost. Now he’s back at school in Princeton, and gambling online to pay his tuition (which, surprisingly doesn’t work so well). When Princeton threatens to boot him from school for his against-policy problem, he decides to fly to Costa Rica to confront the online poker tycoon Ivan Block (Ben Affleck) for rigging the game. Block not only offers Richie an apology and the cash that he lost, but also a job. Shoot, who needs Princeton when you can live in a tropical paradise that rains money?

Rather than being about the world of online poker that sucks in (and rips off) the end user, the story is basically another money-trail thriller where you know that Block is a douche, and Richie is naive. Shoot, Block has a yacht called The House (because “The House always wins”… get it?). Richie’s the last one to know that Block is up to no good, but by then he is in so deep that the FBI (Anthony Mackie) is on his tail, too.

Oh, and there is a girl, too. I think her name was Rebecca… and the “I think” part is notable, since she actually gets second billing (Gemma Arterton) on the poster art. she is there, of course, for requisite sexual tension, but otherwise is barely there, as a character, and in the film in general.

Curiously, the extras on the Blu-ray prove more interesting than this by-the-book corporate/internet thriller. There is a series of featurettes called “House of Cards – The Inside Story of Online Poker” which tells the much more interesting story of online poker–its legitimacy among professionals, its addictive quality, and the huge problem of regulating the industry. House of Cards, in itself, is way more fascinating and thought-provoking than the film itself.