Infernal Affairs II reveals a surprising past friendship between the two characters, as well as a deeper history, making the characters more complex.
By Lindaon October 27, 2013
0 Comments
Our Rating 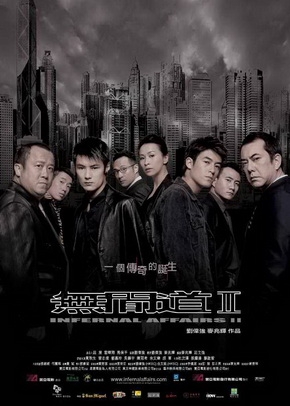 Now here is where it gets tricky. Infernal Affairs II is actually a prequel to the original film, and III is a sequel. Get it? If you were to watch the movies chronologically, it would be II, then I, then III. Luckily the films were shot close enough together that there is a continuity of the actors playing the recurring roles, even if the two main 30-something characters have 20-something “early years” counterparts who don’t look a heck of a lot like their elders.

So! Infernal Affairs II takes us back to 1991-1997—before Hong Kong’s transfer of sovereignty from the Brits to the Chinese—when two young men are first recruited into their respective roles. Yan (Shawn Yue) is a young tough who washes out of the Police Academy when his past record catches up to him. But Inspector Wong (Anthony Wong) gives Yan a second chance. He is intrigued by Yan’s familial ties to the powerful Ngai crime family. You see, the top dog of the Ngai family has just been murdered, sending the next generation scurrying. Emerging as a surprise power-player is the bookish-seeming Hau, played by the scene-stealing Francis Ng with a sort of sinister calm. Wong thinks that Yan would be the perfect mole to infiltrate this crime family: he’s young, already a thug, and has one foot in the door. Yan agrees, thinking the dangerous role is only temporary.

Meanwhile, another fresh-faced academy cadet Lau (Edison Chen) is secretly a mole for small-beans gangster Sam (the scene-stealing Eric Tsang) who is jostling with the Ngai family for power. Lau was groomed from the start, set up to graduate from the academy and become a policeman, all the while being the mob’s pocket. Young Lau has a double life, being the model cop, while secretly meeting and trading information with Sam and Sam’s wife Mary (Carina Lau) (whom the young man fancies more than professionally).

But the truth is, the movie is stolen from the young guns by the likes of Tsang, Wong, and Ng. The two younger actors playing Yan and Lau have big shoes to fill, following the stellar performances of Andy Lau and Tony Leung playing the same roles in the original movie. In the extras on the DVD, Edison Chen constantly laughs about how he was over his head with this movie, and even Anthony Wong makes an offhand remarks that the Chen and Yue were, errr, rather inexperienced as actors.

Anthony Wong and Eric Tsang have a great onscreen chemistry. Infernal Affairs II reveals a surprising past friendship between the two characters, as well as a deeper history, making the characters more complex. And Francis Ng is simply an awesome villain. He looks like a mild-mannered accountant, with perhaps a single bead of sweat on his brow to make him menacing. Simply put, if Infernal Affairs II relied on the characters of Yan and Lau, the movie would have stumbled, because the Chen and Yue don’t have anywhere near the charisma of Andy Lau and Leung. But luckily Wong, Tsang, and Ng are around to pick up the slack, making this prequel a good stand-alone cop/gangster film, but also an intriguing complement to the original film.