Owen Wilson is one of those comic actors who can milk laughs out of even the most inane dialogue. With his pothead drawling deliverance, his characters often come across as variations of the same guy—whether a supermodel in Zoolander, an upper class snob in Meet the Parents, or in this case, a cowboy in the Old West era. But, damn, if the guy isn’t a hoot. 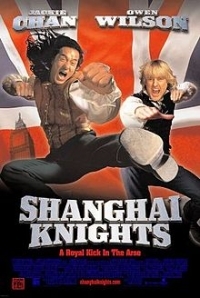 Owen Wilson and Jackie Chan reprise their roles from the hit Shanghai Noon, as ladies’ man cowboy Roy O’Bannon and former Chinese Imperial guard, now Old West sheriff, Chon Wang. Chon’s father has been killed in China by a hissingly evil stranger (Aiden Gillen, with a single strand of his disheveled curly locks out of place), who steals the Imperial seal that the old man guards with his life. Turns out this mysterious assassin is British parliament member Rathbone, who is 10th in line for the throne. With the seal, he and equally bitter Chinese royalty outcast Wu Yip (Donnie Yen) plan to take over and rule the world. Or something.

Not that the plot matters. It is there simply to introduce the character of Lin (Fann Wong), Chon Wang’s lovely sister, who wants to avenge their father, and to move the action from America’s Old West to Jack-the-Ripper-era 1880s London. Roy becomes smitten, Chon become protective, and they all get into hijinks of humor and ass-kicking. There are lots of jokes to be had at the expense of the British, and lots of opportunities for the guys (and the gal) to get into trouble (my favorite action sequence involves Jackie Chan, umbrellas, and a knowing wink to Singin’ in the Rain).

I couldn’t help but note that Shanghai Knights evoked the feel of those fun but forgettable live-action Disney movies from the 70s. The violence is cartoonish, where no one ever gets hurt (you know the type, a guy falls five stories and crashes through a roof, only to rub his behind and moan, “Owwww…”). There is a constant undertone of randiness through the character of Roy, but nothing gets more explicit than a pillow fight with prostitutes, or a lick on the cheek. This film is only PG-13 because of a handful of swear words that could easily been omitted.

Overall, Shanghai Knights is the type of film that kids will love, and adults will be able to tolerate… or even enjoy. With Owen’s laughs and Jackie’s moves, Wilson and Chan are as amiable as any mismatched comedy/action team. This movie isn’t particularly memorable or groundbreaking in any sense, but it is completely harmless entertainment.

(Be sure to stay for the closing credits. Some of the outtakes are funnier than the jokes in the movie itself!)