Ever since seeing Léa Pool’s lovely 1999 coming of age film Emporte-moi (Set Me Free), I’ve looked forward to her films. Not that she has gotten close to that lovely, sublime film since, but I keep hoping. Her latest returns to that familiar theme: a seemingly happy suburban family unravels over one fateful summer in the last-innocence era of the 1960s. Mommy Is at the Hairdresser’s (Maman est chez le coiffeur) (4/8) shows us a father that is fooling around (with another man, it is implied). Mom finds out, freaks out, makes the kids a last angel food cake, lovingly frosted, and leaves town. In the meantime, the teenage daughter Élise (Marianne Fortier) finds herself taking care of troublesome little brother Benoit (the lovely, soft-faced boy Hugo St-Onge-Paquin) while middle bro Coco (Élie Dupuis) perfects his summer project: a motorized go-cart. 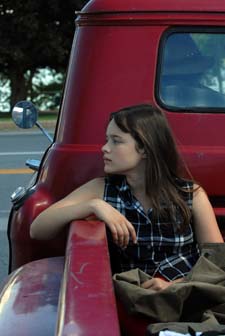 Mommy is a curious concoction in that it paints this time as both the worst and best time of the kids’ life. For every trauma, there is a soft focus moment of the kids skipping with glee as they fish down the river, or riding their bikes with other kids down the road, or having make-out sessions with other kids, etc. And little Benoit is painted as emotionally troubled or “retarded”, but the most that is implied by that is that he is really just ignored and sometimes knocks over a glass accidentally (except for a strange scene where he is upside-down in the closet, banging his head on the door). Needless to say, the film never seemed to gel for me, and it didn’t really have an emotional center that pulled me in. I had more of a “huh” response.

Luckily my next film Little Soldier (Lille soldat) (7/8) was awesome, and will definitely be at or near the top of my Best of the Fest list. Annette K. Olesen’s latest follows Lotte (Trine Dyrholm), a troubled soldier who has just returned from war and is obviously suffering from some severe post-traumatic stress. Her own father (Finn Nielsen) doesn’t even know she’s been back for a couple months, but when he finds out, his first response is to give her a manly punch in the shoulder and get her drunk at the local pub. Then he offers her a job. Dad is a bit shifty. He runs a hauling company, but on the side pimps out immigrant women as prostitutes, and he is short of a driver. Normally a man would be the driver/bodyguard for the most popular women, but Lotte has the brawn to handle it, and more importantly, needs the money. She finds herself assigned the the testy but gorgeous Lily (Lorna Brown), who is also Lotte’s dad’s girlfriend. Over time, the women slowly gain trust, and an unusual friendship based on their unusual business arrangement. But the more Lotte learns about Lily’s situation, the more troubled she is by the job both women are doing. 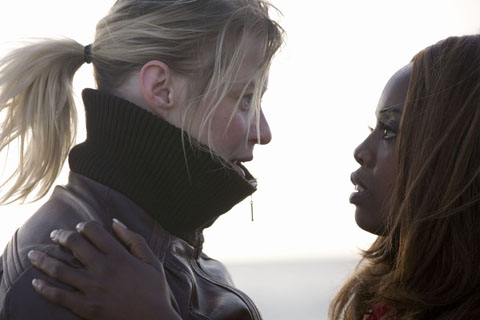 Little Soldier is a fantastic drama, and the two leads are completely compelling. Kudos to Dyrholm and Brown who I’ve been quick to nominate as dual Best Actresses of the fest. I’ve seen that Trine Dyrholm is also in the SIFF film Troubled Water from Norway that is playing this last week. She is my discovery of the fest, and I’ve rearranged my schedule so I can be sure to catch her other film as well. For the rest of you, be sure to check out Little Solider when it plays one more time at Pacific Place, June 10, at 5 o’clock.

PreviousSIFF 2009: Auto-erotic asphyxiation (not me!) and takin’ a couch dayNextSIFF 2009: Piles of garbage, piles of snow, and one scary scary cliff