I love mountain climbing films, and am not at all ashamed that I’m the first to admit that I have absolutely no interest in climbing mountains. 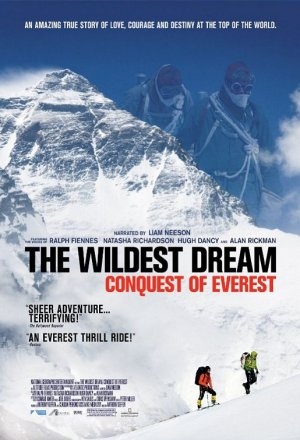 There is something about man (and woman) against the elements that speaks to the adventurer in all of us, even if armchair adventure is all we can handle. I’m more than happy to leave such deadly hobbies to the ones that simply can’t NOT pursue their wildest dreams.

IMAX is made for mountain climbing movies, and I was lucky enough to first see the Everest documentary The Wildest Dream on an IMAX screen. A 70-foot screen is the closest that most of us will get to Mount Everest, much less the summit, so to experience a film like this on such a screen is a fantastic treat. Luckily, the film transfers quite well to a small screen for the home theater experience, in no small part because the story is so gripping.

The Wildest Dream profiles mountain climber Conrad Anker, who, in 1999, found the frozen and preserved body of George Mallory (perhaps the first person to summit Everest in 1924). Anker makes it a personal quest, 10 years later, to retrace Mallory and his climbing partner Andrew Irvine’s original path up Everest to see if the route was even possible, considering the simple equipment and climbing gear of the time. Conrad Anker and his own climbing partner Leo Houlding, at one point, even do part of their climb in clothes and boots of the style that Mallory and Irvine would have worn. (The most, well, chilling part of the film shows Leo in a panic trying to warm his toes after taking off the period leather boots Mallory would have worn.) The modern climbers also answer the question if it is even possible to scale the extremely difficult “Second Step” near Everest’s summit, without the aid of modern gear.

There is a surprising amount of original footage from Mallory’s expedition incorporated into the film, plus there is narration in the original words of Mallory, his beloved wife Ruth, Irvine, and the expedition’s photographer (voiced by Ralph Fiennes, Natasha Richardson, Hugh Dancy, and Alan Rickman, respectively). The original words of Mallory combined with the passion of the modern climbers shows that despite the fact that the equipment is much more advanced, and unquenchable passion of the climbers remains the same. Though the mystery is never solved (especially surrounding the fact that Mallory’s frozen body was missing the photo of his wife that he promised to leave on the summit), Anker and his partner honor Mallory’s spirit by keeping the wildest dream alive.