Despite an undeniably moving core story, I noticed one key problem with Steven Spielberg’s big-screen adaptation of the award-winning stage production: not enough horse.
By Vickieon December 27, 2014
0 Comments
Our Rating 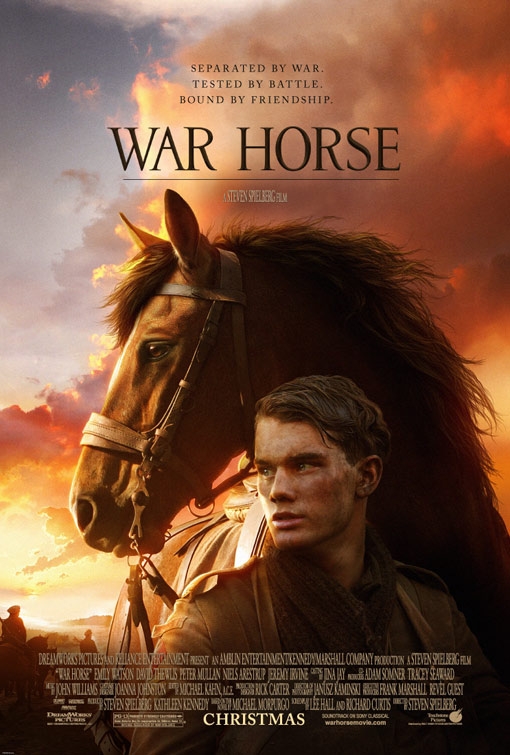 The novel by Michael Morpurgo is set during the First World War and told from the horse’s point of view. The live-theater incarnation features a glorious mechanical horse puppet that, over the course of the play, steals the heart of the audience and, for all intents and purposes, becomes almost real. In both instances, everything revolves around the horse. The film, however, opts to focus more on the various people the horse encounters – and their stories – which, in turn, creates a kind of scattered narrative that isn’t anchored so much in the life (and soul) of its equine star but in the circumstances happening to others all around him.

The horse in question is Joey, a spirited colt, who’s raised from a young age and tamed into a loving companion by Albert (Jeremy Irvine). When war breaks out, Joey is sold to the military by Albert’s alcoholic father (Peter Mullan, delivering yet another terrific performance) for some much-needed cash. Tearfully, Albert promises Joey that they will be reunited. Some day. Somehow. And that sets in motion a series of vignettes as the filmmakers follow Joey through various countries and assorted keepers. At first, he serves as the steed for a noble officer (Tom Hiddleston). Then, he spends time with a young Belgian girl (Celine Buckens) and her sage grandfather (Niels Arestrup). He’s forced to haul artillery for the German army and eventually becomes a momentary TK of peace between feuding nations.

All the while, though, the humans take center stage in the proceedings. Their hardships and struggles and fears play out against the backdrop of Joey’s journey when, in my opinion, it should have unfolded the other way around. Even though the characters are interesting and their plights alternately heartwarming and heartwrenching, poor Joey becomes a supporting player in the film of his life.

There’s also a weird artificiality about the film. With the exception of the battle sequences – including the Saving Private Ryan-esque realism of the Battle of the Somme – nothing feels real. The sets look fake, the sky often seems like a green screen and the central performance by Irvine as Joey’s heartsick owner occasionally crosses the line from “devoted human friend” to “obsessed and potentially unbalanced human nutcase.” Albert’s love for Joey often comes across as borderline romantic, overzealous and insane, and I’m not sure if that’s a result of unclear direction (could be) or poor choices in the editing room (also possible) or the information in the source material (haven’t read it, so I don’t know). It’s a shame, too, since that relationship, between a boy and his horse, should feel more powerful than it does.

I really wanted to love War Horse. I wanted to be swept away by a Christmastime epic and to be weeping my way through its hefty 146-minute running time. I did cry – it’s a movie with an animal in it, so you know it’s partially designed to wring out tears – but I didn’t get lost in its storytelling. I kept waiting to be amazed and to have my breath taken away but, sadly, neither of those things happened. Maybe my expectations were simply too high.

Or maybe Spielberg and company lost sight of what’s given War Horse its true magic.

The four-disc (whew!) Combo Pack of War Horse includes 1 DVD, 1 Digital copy, and 2 Blu-Ray discs (one a bonus disc of extras). Included in these extras are an extensive, hour-plus making-of documentary “A Filmmaking Journey” which details Spielberg’s casting and filmmaking process. Tidbits include that Joey the horse was played by 8 different horses, some which had to go through 45-minutes of make-up to get the white forehead star and white boots of the character. Also, Spielberg reiterates that he insisted that not a hair on the horses be injured during the film, and had a member of the Humane Society closely monitoring all of the shots. Thankfully, there is comforting explanations how they did scenes like Joey’s frightening and heartbreaking barbed wire scene. Other featurettes include “Editing and Scoring” (with composer John Williams and editor Michael Kahn), “The Sounds of War Horse” (with sound designer Gary Rydstrom), and “Through the Producer’s Lens” (with producer Kathleen Kennedy sharing production photos, “War Horse: The Look”, “War Horse: The Journey Home”, and “An Extra’s Point of View”.