They Shoot Movies, Don’t They? …the Making Of ‘Mirage’

Whoah. The way to see They Shoot Movies, Don’t They? is completely cold, like me, and the apparently thousands upon thousands of people who were affected by its repeated showings on the IFC Channel. It is said that the film received more viewer reaction than all 450 other films on the channel, combined.
By Lindaon August 24, 2014
0 Comments
Our Rating 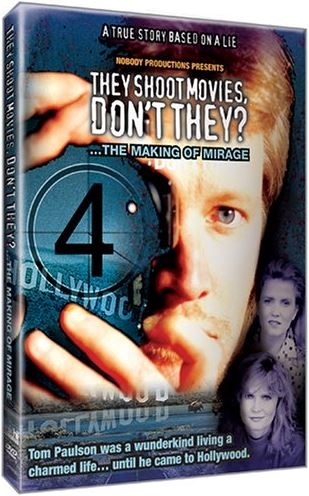 Watching the protagonist of this film is like watching a man climb the highest peak and turn to get his picture taken, only to see him slip and tumble all the way down… while the documentary cameras are rolling all the way. The almost inevitable finale of this film will make your jaw drop, and cause you to rush for the DVD extras as soon as the film is over—to give you some explanation for what you just saw… some justification. If you are an aspiring independent filmmaker, stop reading this review and go rent this movie now. The rest of you looky-loos can keep reading.

The film follows Tom Paulson, who has basically been a golden boy all his life: He was a hotshot baseball star until he was sidelined by injuries in college. Instead, he decided to study film, and made a student film that was so good he was signed with Universal straight out of college. He did well at Universal, but was stuck in the system, never allowed to actually do anything. Finally he quit, with his nest egg of savings, to follow his dream of making his own film: Mirage.

When we meet Tom, Mirage has wrapped, having been funded entirely out of Tom’s own pockets. The problem is, Tom’s pockets are now empty, and he needs some $80,000 for post-production costs. Tom’s Midas touch now seems to turn things to ash, as first his distribution deal falls through (which he thought was a done deal), and he finds himself increasingly desperate to raise the funds.

Cameras follow Tom into hotshot producers’ offices (where he is either belittled, cut down, or politely ignored), into banks (who won’t give him a loan), and repeatedly back to his businessman friend Ari, who offers him half the money, if he can raise the other half in a set amount of days. As the deadline ticks closer, you can’t help but cringe as Tom gradually loses his girlfriend Adele, his composure with his editor (a GREAT scene of two creative minds butting heads), and his dignity, as he grovels to his friends (and even the documentary filmmaker!) for help. Without giving it away, like I said, Tom’s spiral to rock bottom will disturb you.

Now let me say this: The finale of the film may shock and upset you. I certainly was alarmed. And now I say this: Finish the movie, THEN looks at the extras and listen to the commentary on the film. They Shoot Movies, Don’t They? is like the best reality TV: You are sucked in against your will, because real life (or in this case “reel” life) is often much more interesting than fiction.