Let me begin by saying: there’s no way to properly describe what this movie is about. At its core, the film sort of revolves around the pursuit of artistic greatness. I think. I’m not entirely sure.
By Pie Pal Vickieon August 24, 2014
0 Comments
Our Rating 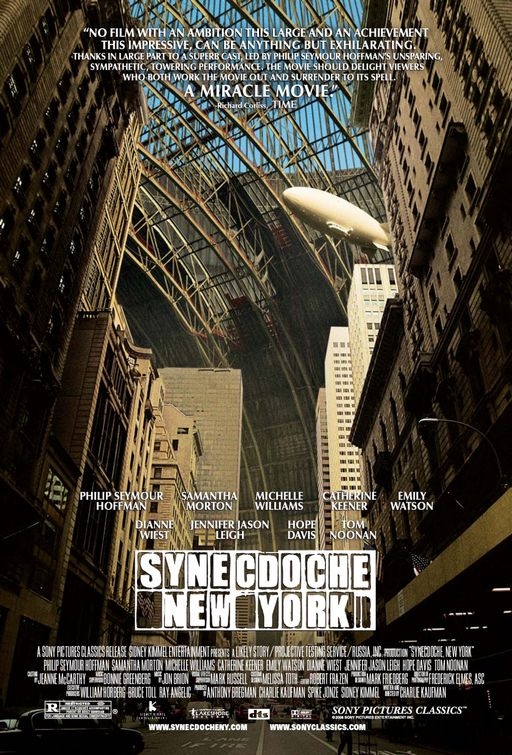 It could also be about loneliness. Or the thankless life of someone working in small-town theater. Or ego. Or the lengths someone might go to in order to leave his mark on the world. Or all of those things. Or none of them.

Want to see it yet?

The most important thing you’ll need to know about this new project from writer-director Charlie Kaufman is this: it’s not for everyone. It’s a surreal, weird, bizarre, poetic, disjointed, beautiful, sad, confusing, freaky and poignant creation that folds in on itself over and over and over again to a dizzying degree and defies any sort of linear storytelling. People either love it or haaaaaaaaaayte it. I fall into the former category.

In a very broad nutshell, the film spans decades and centers on small-town theater director Caden Cotard (Philip Seymour Hoffman), who’s having an existential (and professional and marital) crisis and decides to mount the most important piece of theater of his life… which, in turn, literally becomes his life as he recreates everything and everyone in it. Setting up shop in a colossal airplane hangar in the middle of a non-descript urban center, Caden sets out to (literally) build his opus; his most important work ever, which starts out as a seed of an idea and eventually grows to massive, all-encompassing proportions as the years pass and Caden becomes more and more consumed by the process.

A fantastic supporting cast of actresses make up the women in Caden’s life, either in “reality” or in his epic recreation. Among them are Catherine Keener as the wife who leaves him… with their young daughter in tow; Michelle Williams as the ingenue who falls for Caden’s brilliant mind as much as she falls victim to his madness; Samantha Morton as his put-upon assistant and eventual mistress; and Emily Watson and Dianne Wiest as actors within the play within the movie, whose roles in fiction eventually blur with fact in Caden’s world.

Synecdoche, New York is, quite honestly, unlike any other film I’ve ever seen before. It makes no sense and, at the same time, makes complete sense within the context of its own weirdness. That is to say: the movie is more like a cinematic collage or poem than a straightforward story. It’s filled with imagery and subtext and a wealth of material open to (different) interpretation by audience members, based on what each individual viewer brings with them to the table when they watch it. For me, its themes of isolation and creative struggle and the desperate (often misguided) search for connection resonated most strongly and profoundly, making the movie something of an uplifting tragedy by credits’ end. But someone else with a different life experience behind them may discover something completely different within its frames. Or they might hate it outright. It’s that kind of movie.

For me, though, it was a thoroughly enriching movie-going experience, and watching this intricate cinematic tapestry unfurl was, for me, magical.