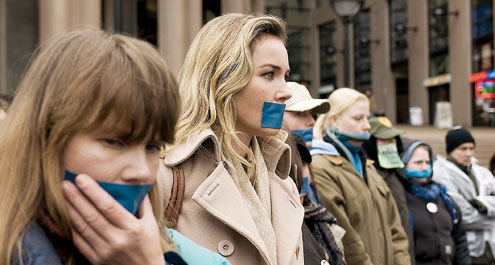 It’s not every day that you can say your first order of business is going to the movies with Charlize Theron, but that’s exactly what we did at 3:00 PM today. Joining the ‘Lize in support of their new film Battle in Seattle (6/8) were Michelle Rodriguez, Andre Benjamin, Martin Henderson, Woody Harrelson, and of course, writer-director Stuart Townsend. After the whole gang went up to introduce the film, they took their seats to actually watch it with us, as it was the very first time this movie would be shown in front of an audience.

Battle in Seattle was much better than I expected, and I was nervous about it. Maybe something about it taking place in my hometown prevented me from taking it seriously, and the silly title didn’t help. Well, I don’t think it’s silly anymore. This was a powerful (though clumsy at times) account of the WTO riots that tore Seattle apart in 1999. The ‘Lize is especially great, for anyone still smarting from Aeon Flux.

The film received a lengthy standing ovation, and whether or not it deserved it, I turned to Dan and whispered, “We’re in the middle of one of those film festival standing ovations that gets mentioned on the movie’s Wikipedia page!” You know, like Fahrenheit 9/11 (20 minutes) or Pan’s Labyrinth (22 minutes). Ultimately, this one probably didn’t clear 10 minutes, but it was still exciting. And it was awfully touching to see Townsend and the gang receiving such enthusiastic props for a true labor of love.

As Townsend, Theron, Rodriguez, Henderson, Benjamin, and Harrelson reappeared onstage for the Q&A, I remembered to keep an eye out for Rodriguez’s alcohol-detection bracelet, but it was nowhere to be found. I also tried to keep an eye on Charlize, as she looked so ready to go home that I was afraid she would disappear if I blinked. She was definitely supportive of her husband long-time boyfriend, but she certainly wasted no time making tracks out of there! As for Townsend and the rest of the cast, they were passionate and informative, which was a pleasure to see.

Dan and I passed the remainder of the afternoon with some delightful conversation (and beer and appetizers) with Vickie’s friend Heather. As the nachos disappeared (as reliable a method of keeping time as any), I realized it was almost 7 PM and dashed out of the pub to buy a TIFF ’07 t-shirt before the box office closed. Because everything in this city is ridiculously convenient, the box office was not only nearby, it was across the street and visible out the window from our table.

Eventually, Dan and I located the theater on time, and observed the industry peeps enjoying their Saturday night — not seeing movies, but schmoozing each other in dense clusters along the sidewalks and in bars and restaurants. It was like watching a nature documentary. It was also a lot like being home in LA. Again, I was filled with secret yearning to be one of them, something that never happens in LA. I just want the summer camp version of their film industry lives, which really just means I want to hang out in Canadian bars for a living. 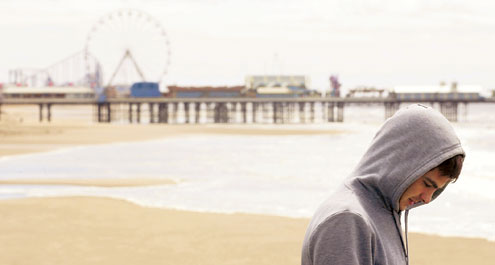 At 9:45 PM, we saw Boy A (7/8), the story of a young man struggling to reenter the world, having been imprisoned after commiting murder as a child. Continuing our streak of fortuitous film choices, this one was nearly faultless and featured a hell of a debut performance by Andrew Garfield. Director John Crowley as well as Garfield provided a Q&A after the screening, and it was really interesting and Garfield is so dreamy and talented and dreamy and did I mention he was cute. Unfortunately, you could hardly tell, as someone neglected to turn on the spotlight, forcing Crowley and Garfield to answer questions from the shadows.

Afterwards, we sat on the large rock (if there’s an actual name for this well-known rock, I don’t know it) and people-watched, remembering that this is probably the last big night of the fest as far as celebrity sightings are concerned, as Vickie informed me that they front-load the festival to allow industry folk to return to LA on Sunday. So far, I have had horrible luck spotting celebrities on the street, though the Battle in Seattle crew wasn’t too shabby!