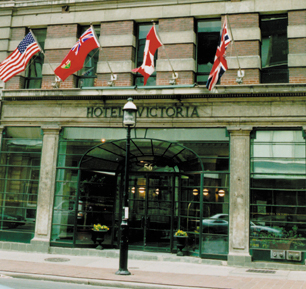 I’m writing this from my hotel room in Toronto, where I’ll be attending the Toronto International Film Festival (TIFF) for the next seven days.

This has been a huge dream of mine since I started going to the Seattle International Film Festival (SIFF) in 2001. I’ve always wanted to visit Toronto, I’ve always read Vickie’s amazing TIFF diaries, but I’ve never had the funds to get my ass across the continent to share in this amazing experience. Until now!

This is the year I decided to put every spare dollar towards making this Canadian dream come true. Back in April, Dan and I booked our flights and a swank hotel room for cheap. A few months later, we purchased some advance ticket packages. Last week, we scheduled our picks and FedExed the order form to participate in the lottery (!) that would determine whether we would see the films we wanted or not. Last night, we got on a plane and five hours later we were in Toronto. Airplanes are amazing! No wonder it costs so much money to ride them.

Dan and I are staying at the Hotel Victoria, which I would like the record to state I chose solely because it is named after Vickie (as well as being affordable and conveniently located, of course). Hotel Victoria is like, okay, maybe some hookers died in the exact spot where I’m writing this, but this place has really pulled itself together. Now it’s fancy and modern, but still has “character.”

After three hours of sleep on the plane, the first thing we did in Toronto was head to the TIFF box office to pick up our tickets and redeem a voucher for one more movie choice. Because nothing can ever go smoothly, we faced several issues here:

2) When picking out your movies, you must schedule your screenings so they don’t conflict with each other — but because of the lottery system, you might not get all your picks, so you must create a schedule of alternates that won’t conflict with each other OR your first choices. We ended up with tickets to three of our alternates, but for Thursday we didn’t get our first choice OR our alternate. So we had to choose another movie in person.

3) When we arrived at the box office, the line stretched out of the office, down the hall, out the revolving doors, around the corner, and down the outside of the building.

Fortunately, the abbreviated third act of this story is, they gave us the tickets without a voucher, we got tickets for another movie, and we didn’t have to wait in line AT ALL.

Later in the day, Vickie led us on a delightful tour of the area and all the TIFF venues where we would be spending so much of our lives for the next week. Unsurprisingly, Dan and I spent the final leg of the tour nearly keeling over from sleep deprivation, which is also why this entry is about to end so abruptly zzzzzzzzzzzzzzzzzzzzz.