Dear lord. It’s 1:34am, I have The Skulls on in the background and I am only just now starting this blog entry. It’s been a very long day… most of which was not spent TIFFing.

I met up with Eric and Dan for dinner before a walking tour north through the city from Commerce Court through the Eaton Centre and along Bay St. to the Varsity. The sidewalks were filled with lanyard-wearing, pass-sporting, tote-bag-carrying festival attendees and I kept pointing out the TIFF tote bags that, for some reason, aren’t part of the out-of-towner packages. You’d think for that extra $150, the fest would spring for a plastic sack and a Starbucks gift card, but no.

The Varsity was teeming with people, and I parted ways with Eric and Dan to head to my first screening of the festival and my only screening of the day. It was a two-fer of documentaries both dealing with democracy: Dinner With the President: A Nation’s Journey (5/8) and Please Vote For Me (7/8).

Dinner was a profile of Pakistani president Pervez Musharraf, who discusses his hopes for democracy, juxtaposed with interviews with Pakistani citizens from a wide array of backgrounds. It was a thoughtful and thought-provoking film but, I have to be honest, it wasn’t my thing. I’m not a fan of political documentaries, mainly because I find the subject matter often dry, so I found myself zoning out and counting the minutes until the film I actually came to see. 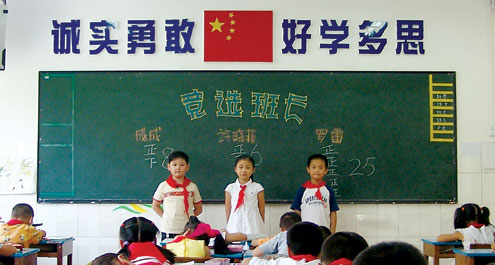 Please Vote For Me is a charming, funny and occasionally alarming look at a trio of third graders – a pudgy rabble rouser, a militaristic veteran monitor and a sweet girl who almost made me cry – at an elementary school in China, who are all vying for the position of class monitor… a position normally appointed by teachers but which, for the first time, will be decided by a student vote. Watching the drama amongst the kids, and the “stage mother” antics of some of their parents was fascinating, as the “politics” in the classroom so closely resembled what goes on amongst adults campaigning for positions of power. Seeing everyone take the whole thing as seriously as they do (at one point, the ENTIRE CLASS starts weeping!) was equally entertaining.

As the night wound to a very late close (the screening didn’t end until just after 11pm), I realized it would be super-excellent if the fest organizers mandated that NO ONE be admitted to screenings after the first five minutes. For at least the first 20 minutes of tonight’s first film, person after person after person after person wandered in, poked around for seats, was assisted by ushers and generally disrupted the proceedings. Just as frustrating was the huge gaggle of people who stood up and left (?!) at the end of the first film… DURING the introductions for the second film. I thought that was kind of rude.

Celebrity Sightings: None, but plenty of people who wanted other people to think they were celebrities.

Roger Ebert Sightings: None, but he’s apparently attending this year.

Random Factoid of the Day: Sprinting along St. Clair Avenue in flip flops in humid weather is a recipe for a blister.

Weather For Tomorrow: Partly cloudy and HOT. 32ºC with a humidex of 39ºC. *pant*

Line Buzz: None yet.