TIFF 2007 (Vickie’s diary): Already, the most wretched of the fest.

Today was Eric and Dan’s last full day in Toronto. They leave tomorrow and I’m fairly certain the marquee lights at the fest will not shine as brightly once they’re gone. I’m sad. 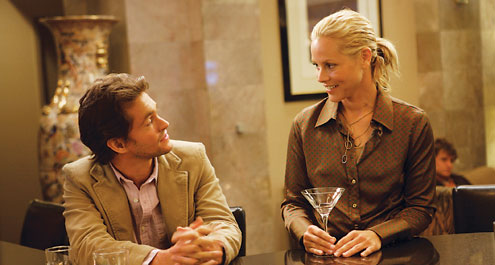 I began this dark (literally and figuratively) day with The Jane Austen Book Club (6/8), a very sweet, fun, light-hearted romantic comedy-drama about a group of women (Kathy Baker, Maria Bello, Emily Blunt, Amy Brenneman and Maggie Grace) and one lone fella (Hugh Dancy) who meet to discuss and dissect the works of the titular author. Along the way, romances fizzle and bloom and fizzle and bloom, broken hearts are healed and new wounds are inflicted. There were a few noticeable gaps in the storytelling – places where you just know a scene was supposed to go – but that didn’t detract from my overall enjoyment of the film. My only real criticism is that Maggie Grace’s character, Allegra The Young Lesbian, kind of gets the short shrift: just about every other character gets a love scene or some moderate making out, but all poor Allegra gets is a little mildly suggestive caressing. Yawn. 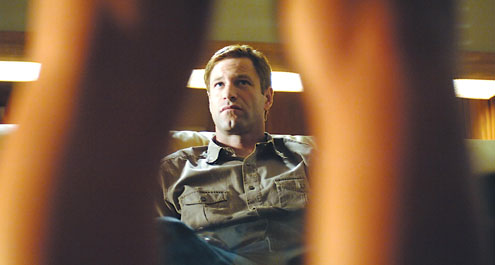 We then trekked to the Varsity for our last film together, Nothing is Private (0/8….that’s right, people, NO PIE!), which may wind up being the worst film I see at the fest, if not the worst film at the festival. It’s so wrong on so many levels that I don’t even know where to begin… except, perhaps, to say that the WHOLE MOVIE is about the repeated sexual, emotional and physical abuse of a 13-year-old half-Lebanese girl in a U.S. suburb. It was written and directed by Alan Ball (Six Feet Under), who clearly thought he was making a Really Important Film but who clearly has no idea that the resulting project is not only offensively lame, but also seem to promote the behaviors it’s meant to be condemning. At one point in the film, Eric had Dan and me in hysterics because, after the umpteenth incident of abuse perpetuated on our hapless heroine Jasira, he leaned over and said, “Why can’t people stop raping her?!?!” Literally, every time a new character popped up onscreen, we wondered how and when they would somehow hurt this poor girl. The film’s lone saving grace was Toni Collette, who seemed to be the only person actually acting AND who boasted the most amusing labor-inducing faceplant in cinematic history. I suspect Eric and I will be doing a joint review of this film at some point after TIFF because, seriously, there’s THAT MUCH to talk about.

Something else to talk about: the bizarre “security” measures at the Varsity. After the three of us took our seats, I decided to go to the washroom before the start of the film. When I saw the line in the ladies’ room was long, I opted to head to the second set of washrooms over on the press/industry side. The volunteers let me through, no problem…until I tried to get back to the theater. “You have to go back outside and get in that line,” they said.

I showed them my ripped ticket. “But I’ve already gone through the line and been inside.”

“You still have to go back outside and join the line.”

So, despite having a seat already, I had to go all the way back out of the Varsity, down the hall and to the stairs (?!), and rejoin the line I’d already been in just so I could get back inside.

Because we were all so fascinated with the film gone horribly awry, we stayed for Ball’s Q&A… which meant I didn’t have time to make it to my next screening (Garage at the Bader). So, instead, we hung out! Yay! We went to the Eaton Centre, had treats from Dairy Queen and took a few more photos before we said our goodbyes. 🙁 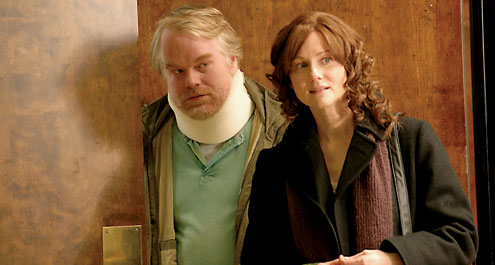 I then hopped on the subway to head to the Bader for The Savages (6/8), director Tamara Jenkins dark comedy about a pair of adult siblings (Laura Linney, Philip Seymour Hoffman) caring for their elderly father (Philip Bosco). The movie was well-done, blending humor and pathos nicely, but I was soooooooo sleepy throughout. I started daydreaming (nightdreaming?)… and then I think I might have actually started dreaming, so I kept adjusting my position in my seat in a bid to stay awake. It worked.

And, per the pattern so far, despite being ready to drop throughout the day, I’m home and getting more awake with each passing minute.

Random Factoid of the Day: Alan Ball is slightly deluded.

Weather For Tomorrow: Showers in the morning, partly cloudy in the afternoon. High of 18ºC. Bring a sweater!

Line Buzz: More raves for Boy A and some good buzz on No Country For Old Men.

* Postscript: Nothing is Private is now called Towelhead for its regular release title! 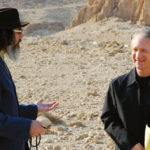