Today was my final day at Hot Docs 2013, and I’m pleased to report that it ended on a high note. It’s always nice when your final screening is a good one, and equally nice when you’re seeing it while hanging out with fun film-loving people. So, special thanks to Mario, Fernando and Merrie for a great conclusion to a week of documentaries!

My lone doc today was Gideon’s Army (7/8), director Dawn Porter’s look at the work and lives of a group of public defenders in the American South. Tireless and dedicated, but paid poorly (compared to their private-attorney counterparts), these men and women are faced with occasionally difficult clients, a system designed to encourage guilty-plea bargains and a career that, often, consumes much of their existence. The film is structured in two parts: the first half is get-to-know-you profiles of the various public defenders – including one who’s about to meet the father he never knew, and another who discovers her client has concocted a plot to murder her if he’s convicted; the latter half is largely courtroom-based and covers the proceedings for two of the defendants featured earlier on… both of which are suspense-laden. 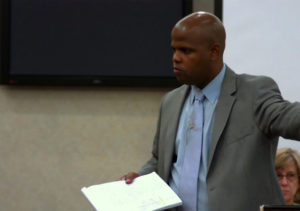 Similar in tone and execution to films such as Remote Area Medical, Gideon’s Army shines a light on the unsung soldiers in sometimes-flawed legal battles. Though they often find themselves forced to defend criminals who have committed terrible acts, they learn (with the help of sage mentors) to appreciate the merits of the case itself (and trying it in court) as opposed to the “merits” of their indigent clients.

I stuck around after the screening to chat with one of my aforementioned pals, and wound up meeting Porter, which was cool. We chatted briefly about a particularly problematic audience member who wanted to debate her about the content of her film, and then I headed home.

I’ve hung up my media pass for another year, and I’m bummed that the festival is over. I love this festival! Hot Docs never fails to impress, and 2013’s crop of films (or, at least, the ones I saw) seemed especially strong. I’m already looking forward to next year…