The full schedule was released yesterday, and since then I have read all 312 film descriptions, narrowed them down to 77 favorites and narrowed them down again, eventually settling on 20 choices (10 first picks, 10 backup picks).

This year, I’m especially impressed the number of documentaries I’m dying to see. These were just a few that caught my eye:

And, of course, there is Religulous, which Dan and I saw chunks of last year, courtesy of Bill Maher and Larry Charles. (The only reason we chose not to see the full version this year was… well, we only get 10 TIFF movies a year, and I didn’t want two of them to be the same movie.)

So, this morning, I madly filled in the necessary booklets and forms, and we sent off our FedEx envelope back to Toronto for processing this Friday. Fingers crossed that we get our first picks, but as we learned last year, it seems difficult to go wrong with such an amazing selection. I mean, even Alan Ball’s abyssmal Nothing Is Private (now re-edited and re-titled Towelhead for release this fall) was an unexpected bit of Slow Roll glory.

For your perusal, here are mine and Dan’s 10 picks for this year:

And here is our collection of backup picks:

Now that I look at it, I’m surprised that only two of our eye-catching documentary faves made it onto the final playlist, but I guess I have more confidence that I’ll be able to rent those at some point. I don’t know when else I will be able to see an Norwegian film entitled “Cold Lunch.” 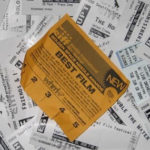