20th Century Women is kind of a rambling, shaggy, coming-of-age movie like the 70s themselves, but it shines due to its cast, especially Annette Bening.
By Lindaon May 4, 2017
0 Comments
Our Rating 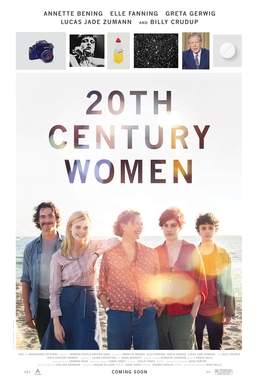 I read that the sweet film Beginners was director Mike Mills’ ode to his father. Now he gives us 20th Century Women, a “thank-you note” to his mother, who had him when she was 40 and raised him as a single mom.

Annette Bening plays Dorthea, an inquisitive free spirt. It is 1979 Santa Barbara and she sees a world changing, and also sees her 15-year-old son Jamie (Lucas Jade Zumann) growing up and becoming a man. Constantly chain-smoking, she watches Jamie through squinting, puzzled eyes and thinks that maybe she needs help raising him to become a man. William (Billy Crudup) is a free-spirit lodger who fixes cars and works on restoring their shared home, and brings the only other male energy but never offers or is suggested to be a father figure. Guilelessly, Dorthea decides to ask the other women in her boy’s life for their assistance: Abbie (Greta Gerwig) is a 20-something photographer who rents a room in their house, and Julie (Elle Fanning), the 18-year-old neighbor that leans on Jamie as a BFF (which is maddening for a hormonal teenage boy). The other women agree to give it a shot.

Despite the title being about women, with each of their lives being roughly explored, the spine of the film definitely revolves around the coming of age of Jamie. Jamie is a good kid, but Dorthea sees him slipping away, or at least slipping into his own, separate-from-her personhood. But Jamie also feels his mom’s distance as she watches him grow up. They adore each other, but have to find each other again.

The character of Dorthea is by far the best thing in a good movie, and Annette Bening is absolutely fabulous. I forgot what a great comic actress she is, and she has more than scene where I laughed out loud. I would not be surprised to see her on short lists for awards season, as she is a treat to watch in 20th Century Women. If Dorthea is indeed based on director Mills’ mom, I think she would be pleased.