As pretty as they may be, I think most people will have to admit that Hayden Christensen and Jessica Alba aren’t the thespiest thespians on the block. To pair them together is pleasing enough to the eye, but unsurprisingly wince-worthy on the drama department. 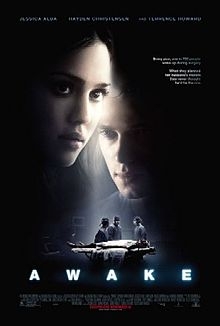 Hayden Christensen plays Clay, a super-rich young man with a domineering and over-protective mother (Lena Olin). Clay has inherited his father’s riches, his business, and one might guess, his bad genes. Poor young Clay needs a heart transplant. On the side, Clay is in love with Sam (Jessica Alba), a match that they guess his mom will not approve of. Despite that, or because of it, they get married in the middle of the night, and just at that moment, his pager goes off… a heart is suddenly available! Time for surgery!

The intro of Awake points out the startling fact that some people, while under anesthesia, suffer from “anesthetic awareness”, which allows them to hear and feel everything during their operations, but leaves them in effect paralyzed, unable to scream or signal for help. Nervousness has Clay choosing his good friend and surgeon Jack (Terrence Howard) for the crucial operation, not his mom’s choice (a man who crows, “I have had my hands inside presidents!”—Really!). He trusts Jack. But at the last second, a replacement anesthesiologist comes into the room. And Clay is put under…

Without wanting to give too much away, it is clear from the title of the film that Clay is indeed going to be awake during the surgery, but will be completely incapacitated. Initially, this is achieved on film by letting us watch the surgery, while giving us the treat of listening to Christensen doing gawd-awful voice-overs of the panicking voice in his head. Let me just say this: Hayden, I just hope you aren’t allowed to narrate books on tape. These moments are indeed cringe-worthy, and not for the reasons the filmmakers probably hoped. Through the force of will, Clay forces himself out of his body, and gets to run around the hospital eavesdropping on situations as well as reliving moments in his past that he can now see and hear with perfect clarity—moments that allow him to, of course, unravel crucial clues that reconfirm that SOMETHING IS WRONG.

Awake is the type of movie where no matter how pre-planned and convoluted a plot there is, the bad guys will voice everything out loud that they are doing, so that any bystander—whether they be an eavesdropping patient or a vapid movie-goer—can piece everything together while they are doing it. The only actors who rise above the material are Howard, who brings a conscience to all his characters, no matter how poorly written, and Lena Olin, who manages to bring a little depth to the role of Clay’s suspicious mom.

The odd thing is, unsuspecting I’m sure to the filmmakers, another film was being made that portrayed this concept of being conscious in a paralyzed body sooo much better. That film was called The Diving Bell and the Butterfly… though not about the anesthesia phenomenon, and lacking a conspiracy plot, that film illustrates how Awake could have and should have been much more interesting that it was.