Coppola’s Tokyo is a dreamscape of lights, sounds, and washes of humanity.
By Lindaon October 27, 2013
0 Comments
Our Rating 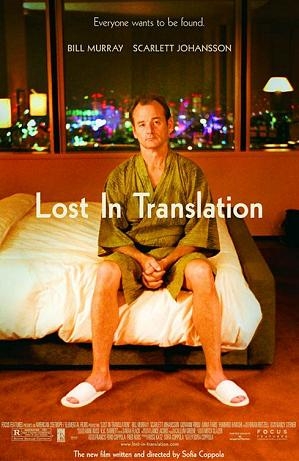 I’ll admit it, I’m a bit of a Japan-o-phile. I (heart) Japan! When I heard about this film, about a couple of Americans wandering around Tokyo, I immediately thought, “Oooo… now there’s the movie that I would make if I had money/talent/actor friends!” Lucky for me, Sofia Coppola, who in my book is well-out of her father’s very large shadow as a director, has made my movie for me, and I don’t know how it could have been done any better.

Bill Murray basically plays a version of (I imagine) himself. His Bob Harris is a middle-aged man, whose heyday as a popular mainstream actor was a couple of decades ago. He takes a gig in Japan, to be the advertising face for a whiskey brand (for a cool $2 million paycheck), but finds himself wondering why he isn’t at home acting in a play instead. Bob is a fish out of water in modern neon-lit Tokyo, and he can’t wait to go home.

Charlotte (Scarlett Johansson) is also “lost” in Tokyo. Fresh out of college, she is stuck at the same hotel as Bob, as she simply waits, wasting time, while her photographer husband John (Giovanni Ribisi) is off on photo shoots with hipster bands. Charlotte has plenty of time to think, while she hangs out at the bar, or wanders the streets and temple districts, and wonders what the heck she is doing with her life.

Of course these two will meet.

I was waiting for the almost inevitable icky romance (I mean, my god, the age difference between the two is about 35 years!), but Lost in Translation offers something stunningly original in the movies: a genuine friendship! In a way, the film IS a romance, but it is instead the meeting and melding of minds rather than bodies.

Bob and Charlotte gallivant around Tokyo, hooking up with Japanese slackers, singing karaoke, running for cabs, and just hanging out, disembodied from their real lives and realities. Coppola’s Tokyo is a dreamscape of lights, sounds, and washes of humanity. And you know what? That is how it is to be in a strange city on your own—you can disappear from your real life and be anonymous.

The pace is gentle and blurry, effectively mirrored by the excellent soundtrack (if you dug the style of Air’s dreamy soundtrack to Virgin Suicides, you’ll dig this one as well). I’ve read and heard opinions that this film is slow, boring, and nothing happens. But I found Coppola’s film to have a uniquely American perspective while at the same time reflecting the patient storytelling style of some of the best Japanese character-driven films (anything from classic Kurosawa like Ikuru to the more recent indie gem After Life).

It is easy enough to relate to Bob and Charlotte’s wide-eyed experiences in Tokyo (which made me smirk in recognition, remembering my own visit there a few years ago). But Murray and Johansson are so good that they developed characters deeper than their mere dialogue offered. Bob and Charlotte could be you or me; they could be anybody or nobody. Though their relationship is not full of car chases, sex, and explosions, they touch each other’s lives (and the viewers) in a more lasting, real way in which (I hope) we can all relate and gain some sort of comfort.