21 Grams is a messed-up jigsaw of three separate stories hacked up into individual moments, and mixed together into one not-always-cohesive whole.
By Lindaon February 8, 2014
0 Comments
Our Rating 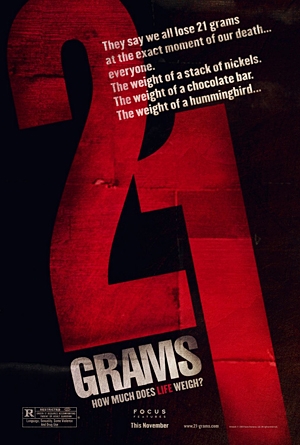 Imagine taking three jigsaw puzzles—one blue, one red, and one yellow—breaking them apart, shaking up the pieces, and throwing them on the floor. The pieces are not in order, and they fall randomly. The final yellow piece to snap into place might be smack in the middle of the mess. The beginning blue piece might be at the far side of the pile. Now, let’s call this pile of pieces a movie, and you’ve got 21 Grams, a messed-up jigsaw of three separate stories hacked up into individual moments, and mixed together. To make it even crazier, sometimes the pieces overlap with each other, but you are not sure how or why, until you’ve seen the big picture. Think Memento, but without the neat reverse-order of events. Depending on your state of mind, and more importantly your patience, this may be a neat and unique cinematic editing trick, or it may seem unbelievably pretentious and annoying.

This is a movie that you want to go into completely fresh. I will only give the a bare-bones introduction to each character, because part of this puzzle’s intrigue is that you don’t know what the final picture looks like until the last piece snaps into place.

We are introduced to three main characters, all at three different points of their respective storylines. Benicio del Toro plays Jack, an ex-con turned born-again Christian. He seems to have turned his life around to attempt a clean start. But the healing with his wife and kids is taking time, he’s having a hard time holding down a job, and he still has dangerous flare-ups of a violent temper. Paul (Sean Penn) is a 40-ish man dying of heart disease, his body is wasting away, and his wife, who has just returned after a separation, desperately wants to have a child with Paul before he dies. Naomi Watts plays Cristina, a seemingly squeaky-clean yuppie, with a perfect suburban house, a nice husband, and two beautiful kids, but has a past of abusing drugs and alcohol.

The lives of these three characters collide both directly and indirectly in an accident, and that is all I’ll tell you.

I’ll admit that for the first 20 minutes or so of 21 Grams, I was like, “What the f&$#! is going on???” Director Alejandro González Iñárritu (Amores Perros) has stripped away the most obvious framework of storytelling: the linear timeline. You don’t even really realize how much we, as viewers, depend on that linear framework, until it is reversed (like in Memento) or completely messed up (like in 21 Grams). This experiment, for the most part, was fascinating to watch, but at times became somewhat tedious. About 3/4ths through the movie, you start to get impatient with the “space-filler” scenes popping up, because they are just delaying the conclusion, or the payout of the story. I felt that the overall film could have used a trim of about 20 minutes, tightening up which was, for the most part, and intriguing set-up.

Beyond the style of the film, which most people will discuss after seeing it, it must be pointed out that the other thing that 21 Grams has going for it is the excellent acting by all the leads. Sean Penn, in particular, is having a banner year—with this film and his acclaimed role in Mystic River (these two roles are very different, showing his range). Naomi Watts is very solid, almost wrenching to watch as she is nearly destroyed by… oh, I won’t tell you. But, for me, Benicio del Toro was the one to watch. His character has so much inner turmoil, rage, and regret, that I couldn’t take my eyes off him. He is simply outstanding.

I’m sure that 21 Grams will rake in some acting nominations when award season comes around, and it rightly should. The film is probably too unusually-structured (and rather bleak, I should mention) to gain a wide-audience, but film-goers who want to see a film that is fresh and challenging should see this one out.