Iñárritu films have a relentless intensity. He’s becoming known as the guy who throws several stories into one film and makes them overlap meaningfully… which honestly can be exhausting. 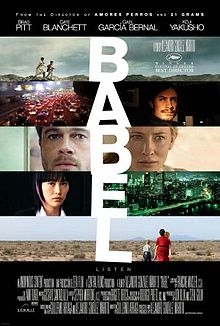 Director Alejandro González Iñárritu is obviously a man exploding with talent and passion. He works wonders with actors, and he tends to infuse his tales with a relentless intensity. Amores Perros was his impressive debut, followed by the overly ambitious 21 Grams, which was still admirable. Now he comes forth with perhaps his most accessible film that is still frustratingly just too much.

In the previews for Babel, a voiceover by Brad Pitt explains the Biblical reference, of how mankind was scattered and given many different languages so that they could not communicate. The movie itself, however, doesn’t even bother with that introduction, and instead throws us into four separate stories (which in the style of Iñárritu’s other films, end up overlapping).

A tourist (Cate Blanchett) is shot in a freak-incident, through a tour-bus window in the desert of Morocco. The wounded American and her husband (Brad Pitt) are dropped in a remote village where she lies bleeding profusely in need of medical attention, and her husband frantically tries to communicate for help. The shooter happens to be a goat-herding boy who is screwing around with his brother, testing a new gun to see if it will really shoot the 3km that the seller claimed. Oops. I guess the bullet did goes as far as that bus in the distance. In the meantime, the American tourists’ Mexican nanny (Adriana Barraza) back in the States is in a dilemma. The parents are extending their trip, but she wants to go to her son’s wedding over the border in Mexico. So she trundles her two blonde charges and takes the trip, but of course border trouble awaits on their return. And finally and young deaf-mute woman (Rinko Kikuchi) in Japan lashes out with an aggressive sexuality, wanting and needing to be noticed, but hitting a wall of communication because she can’t hear, and most others can’t understand her sign language.

All of the four plots are extremely well-acted, and at no times is Babel boring. But it does at times get a little frustrating. Just when you are getting into a story, it abruptly cuts into the middle of one of the others. You get teased with having a good 15 or so minutes to get involved in one plot, then it jumps again, leaving you reeling and wondering where you are in the big scheme of things. But like I said, the cast is fantastic, without a weak link among them, down to the smallest supporting characters. Particularly outstanding in the cast are the two Oscar nominees, Barraza as the heartbreaking Mexican woman who thinks she is doing good, but gets deeper and deeper into trouble, and Kikuchi, who is fierce in her intensity, but nerve-wracking to watch (it seems almost inevitable that harm will come to her, so that you find yourself dreading her subplot). Heck, even Brad Pitt is great.

However, I have to say, director Iñárritu is in danger of becoming trapped by his own movie-making schtick. In the way that M. Night Shyamalan is known for throwing an inevitable twist at the end of his flicks, and Christopher Nolan loves to bend perception in his films, Iñárritu is becoming known as the guy who throws several stories into one film and makes them overlap meaningfully. He is certainly a dynamic director, I won’t argue that, but I think he still has room to grow before he makes his true masterpiece.