Pulling back the curtain on the courage and inner conflict required to speak truth to power – especially when it comes to high-profile media personalities – this sometimes-great, sometimes-meh ripped-from-the-headlines docudrama chronicles the downfall of lecherous Fox News CEO Rogers Ailes (played by John Lithgow, buried under a mountain of latex prosthetics).
By Pie Pal Vickieon December 14, 2019
0 Comments
Our Rating 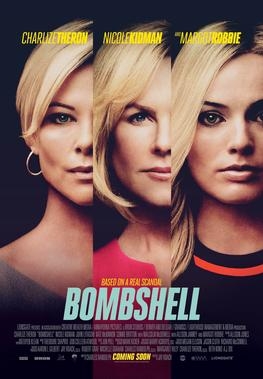 Kicking off just before the 2016 U.S. Presidential election, the film follows the rocky trajectory of two of Ailes’ most famous accusers: Fox News anchor Megyn Kelly (Charlize Theron) and Fox & Friends co-host Gretchen Carlson (Nicole Kidman). Each one is at a different point in her career and is weighing different stakes: Kelly’s star is on the rise, while the more-seasoned Carlson is plateau-ing in the eyes of her image-driven boss, largely because she begins to push back against the rampant chauvinism at the network. Entering the fray is composite-character Kayla (Margot Robbie), an Evangelical-millennial production staffer whose beauty and overwhelming thirst for an on-air spot lands her squarely in Ailes’ repulsive crosshairs.

When Carlson is fired for her refusal to play ball with the boys, she files a personal lawsuit against Ailes for sexual harassment, hoping that some of her female colleagues at the network – virtually all of whom, it’s implied, were subject to Ailes’ advances – will come forward to support her claims. And that’s when the disgusting house of cards begins to fall, as a rage-filled Ailes and his cronies scramble to hang on to power while the women at Fox weigh their professional options.

Filled with noteworthy supporting turns – among them: Mark Duplass as Kelly’s husband Doug; Kate McKinnon as a closeted-liberal-lesbian producer; Alanna Ubach as Jeanine Pirro; and Allison Janney as Ailes’ attorney, Susan Estrich – as well as a slew of blink-and-you’ll-miss-‘em cameos from the likes of Tricia Helfer, Jennifer Morrison and Ashley Greene, the film’s success sits on the capable shoulders of its quartet of stars. Lithgow is magnificently gross, and both Theron and Kidman are unsurprisingly solid, but the film’s strongest performance comes from Robbie.

Unlike the others, Robbie can’t simply rely on prosthetic make-up and mimicry to create a three-dimensional character. Though Kayla is fictional, her circumstance elicits the strongest reactions: she’s naïve and eager, and the personal consequences of her quest for fame feel the most devastating.

But the film has an uneven tone – it opens with Theron’s Kelly breaking the fourth wall and directly addressing the audience, which feels like the set-up for a somewhat lighthearted film. Pretty quickly, though, Bombshell shifts gears to become a straightforward drama. Then, amid the seriousness, appearances by actors portraying some of Fox News’ biggest names feel like they’ve been dropped in for laughs (Geraldo Rivera and Rudy Guiliani garnering some of the biggest guffaws). I was never really sure whether the film was meant to be hard-hitting or entertaining or a combination of both.

And there’s also the moral ambiguity of its key figures. Are we supposed to feel bad for Kelly and Carlson? View them as heroines? Land somewhere in between? Are we really supposed to see Rupert Murdoch (played by Malcolm McDowell) as a noble savior? Bombshell leaves those lines blurry and I wish they’d been a bit more clearly drawn, as the most damning and disturbing scenes involve Kayla… a person who didn’t actually exist.

In the end, Bombshell doesn’t offer up too many new details on the scandal, but nonetheless delivers a series of strong performances and, more importantly, a much-needed message about solidarity and the importance of fighting back against sexism, misogyny and bullying, especially when the perpetrators sit at the highest levels of power. 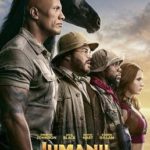 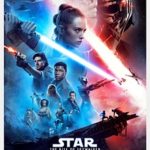