All the gags depend on everyone in the movie believing that Robert is actually Britney Spears, but the funny thing is, he begins to convince you after a while. This guy is really, really good.
By Ericon December 21, 2013
0 Comments
Our Rating 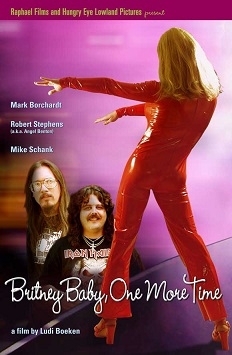 A filmmaker named “Dude” Schmitz (Mark Borchardt, of American Movie) and his crew (yep, including Mark’s buddy Mike Schank) get thrown out of a Britney Spears concert for asking her if her boobs are real. A drag queen named Robert Stephens (Angel Benton), winner of a Britney-look-alike contest, also gets thrown out for being “an impostor.” They meet in a diner later that night and Dude, smelling a profit, proposes that they go on a road trip to New Orleans, the site of Britney’s next concert. Dude plans on passing Robert off as the real Britney in footage he’s sending back to the network for big bucks, but Robert thinks that he’s the star of a documentary and that he’s going to end up meeting the real Britney.

Robert and the crew have several adventures along the way to New Orleans, all of which are videotaped by Dude and sent back to the network as footage of the real Britney. “Britney” saves a little girl from an exploding car, teaches a diner full of truckers the dance from “Oops! …I Did It Again,” sings and dances for sick children at a hospital, gets mobbed at a shopping mall, and more. Only Dude knows that the entire country believes that Robert is the real Britney, as photos and footage of him circulate. Meanwhile, Britney’s agent, the one who threw them out of the concert in the first place, figures out who the impostor must be and sets out to stop them.

The setups only get more wicked and hilarious as the film progresses, the most outrageous of which involves Robert singing a duet of the national anthem at a hockey game; after the song, “Britney Spears” makes out with her singing partner, also a drag queen, on the big screen, as mothers scream and cover their children’s eyes. Dude’s brother comments, “So wait, they’re both guys, and they’re making out, but they’re dressed up as women, and… they just came out as lesbians? [confused pause] That’s hot, I think.” Of course, all of these gags depend on everyone in the movie believing that Robert is actually Britney, but the funny thing is, he begins to convince you after a while. This guy is really, really good.

The film was shot in digital, but the director wisely sticks to traditional film-camera-like movements, rendering unnoticeable much of the unattractiveness of digital footage. I was initially worried because the actors, well, are obviously not professionals, but either they got better or I stopped noticing, because it wasn’t a problem after a while. It all added to the low-budget charm, I like to think. I mean, when you think of an independent film, this is what you should think of. (Not necessarily a movie about Britney Spears, though.)

Britney’s final act takes place when they arrive in New Orleans. As in all movies of this type, which are founded in the deception of most of the characters, everything falls apart eventually. Lies are revealed, Robert runs away, the bad guys catch up to them, but everything turns out all right in the end. Though it goes through the broad motions of the formula, the final act remains smart and lighthearted enough to avoid making me roll my eyes. I wonder if Britney would agree.