Where the book is long because it has a lot to say, the movie is just… long. 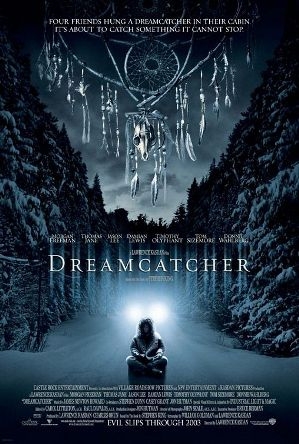 “Dreamcatcher,” the book by Stephen King, derived much of the horror of its alien invasion by letting it be the backdrop to the story of four living, breathing, three-dimensional characters who would have been interesting for over 800 pages even without shit-weasels and plagues of red alien fungus. Dreamcatcher, the disappointing adaptation by Lawrence Kasdan, not only focuses on the alien scares, but adds easily about two or three times more of it than there ever was in the book. And where the book is long because it has a lot to say, the movie is just… long.

Dreamcatcher tells its story through the eyes of four troubled friends: Pete (Timothy Olyphant) is an alcoholic car salesman, Henry (Thomas Jane) is a suicidal therapist, Jonesy (Damian Lewis) is a college professor, and Beav is, um, Jason Lee. Actually, it’s really kind of a shame that Beav dies so early on in the film, because this is the first time I’ve seen Jason Lee on a screen and not wanted to pay someone to hit me over the head with a sledgehammer and put me out of my misery; in fact, Lee’s character was my favorite out of the bunch. But anyway. These four friends were given a psychic connection to each other by a retarded kid named Douglas (but who can’t say his own name and so comes to be called “Duddits”) whom they saved from some bullies when they were children. During their annual visit to a hunting cabin in the middle of nowhere, a blizzard strikes and so does an alien invasion.

The aliens comes in several forms, none of which are logically related to one another (there’s an eel with teeth, there’s a red fungus which grows on humans, there’s a big dinosaur-type monster, and more) but are understood as threatening. The alien baddies are quite icky and creepy, but they’re the kind of “monster movie” monsters who gnash their teeth and snarl at the camera exactly on cue, and never seem to pose much of a threat because, well, they’re so obviously directed. There are oodles of what I hope are homages to and not rip-offs of classic science fiction films, such as Alien, The Thing, and Invasion of the Body Snatchers.

The first half of the film is actually pretty frightening, with its overall tone and claustrophobic suspense remaining faithful to the book. The bathroom scene (if you’ve read the book or seen the movie, you know exactly what I’m talking about) is one of the scariest I’ve seen in a while. And then it throws most of its restraint, subtlety, and atmosphere out the window and becomes very hard to take seriously, mostly because after Jonesy is body-snatched and heads out to infect the world, he has conversations with the alien intelligence and speaks both sides of the dialogue aloud, doing the alien’s voice in a hammy British accent, which is the most ridiculous thing I’ve ever heard. Cue unintentional audience laughter. (This happens a lot during this movie.)

There is a subplot involving Morgan Freeman as a crazy military general who has quarantined the whole area and plans to exterminate the hundreds of civilians that have been rounded up and fenced in. In an annoying loose end, the fate of these people is never resolved, so I guess they’re just totally screwed.

Henry and some other guy from the military (Tom Sizemore) chase after Jonesy in a stolen military vehicle. Henry decides that only Duddits can help them stop Jonesy, so they go and pick him up. As an adult, Duddits is played by Donnie Wahlberg, who is apparently unable to get a job not playing a mentally challenged person in a scary movie. Unfortunately, I don’t know who could make a role like this believable, but it sure ain’t Wahlberg. His Duddits falls flat and has one line that just reduced the audience to giggles during the climax of the film. Maybe you shouldn’t have let the New Kids on the Block break up, Donnie.

Dreamcatcher is a surprisingly hardcore monster movie (I was expecting something a little more psychological than GIGANTIC ALIEN MONSTERS MADE OF TEETH) that actually isn’t that bad as long as you don’t try to take it too seriously, or get frustrated because its source material is so much better. Maybe you didn’t even read the book, and you’re wondering why I’m bitching about it so much. Well, in that case, go see this movie. Dreamcatcher is not really a terrible film and I tentatively recommend it, if you’re into slimy CGI creatures, gorgeous cinematography, and alien exploding out of people’s asses – which I am (into all that stuff, that is, not an alien exploding out of someone’s ass).

Still, though… It’s a shame, after seeing the perfect alien invasion movie last summer (Signs), to see this one disintegrate into mediocrity after a very effective and suspenseful first half.